Gordie Wise: The Man at the Microphone 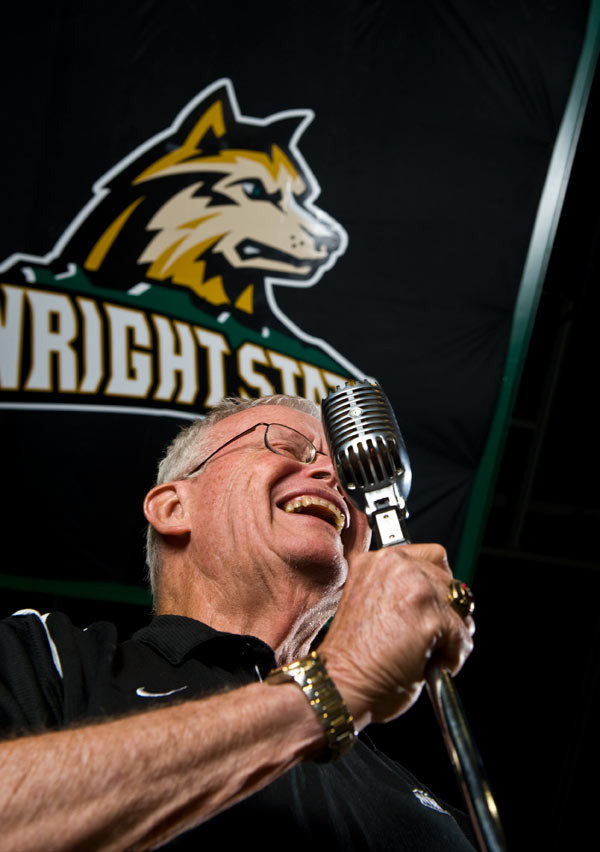 “Welcome to another exciting night of Raider round ball.”

Thousands of Wright State basketball followers have heard that greeting at the start of basketball games over the years, but most of those attending would be hard pressed to put a face with the voice.

And that’s okay with Gordie Wise, who has served as a volunteer public address announcer for more than four decades. Wise started with the first Raiders game at Stebbins High School gym in 1969. Except for missing a few games over the years because of schedule conflicts and illness, he has been the man at the microphone ever since.

Wise was honored in 2008 with an award from the Department of Athletics for his 40 years of service, and he has enjoyed virtually every minute of it. “I have had the best seat in the house for 42 years,” he said with the enthusiasm of someone starting his announcing duties. “It’s been a heck of a ride, and as long as I’m having fun and Bob (Director of Athletics Bob Grant) wants me, I will continue.”

Grant has no plans for a change. “Gordie is part of our fabric,” he explained. “He is really very much like Joe Nuxhall was for the Reds or Jack Buck for the Cardinals. You hear his voice and immediately think of Wright State basketball. He cares deeply for this university, is a consummate professional, and a true gentleman.”

For Wise, 42 years of announcing Raiders basketball games started as a lark.

“Don Mohr was the athletics director and we became friends because I was very interested in sports and college athletics,” explained Wise, who taught marketing at Wright State from 1966 until his retirement in 1993. “We were getting ready to play the first basketball game and Mohr was visiting with several of us who were colleagues and friends. He began making assignments by asking us to assume duties like running the clock and keeping score. He got to me when he was selecting a game announcer. I said I would, even though I had no experience; that’s how it all began.”

It certainly wasn’t his only interest in sports at Wright State. Wise was on the feasibility committee to study starting a sports program at the university. He drafted the original constitution for the athletics council, for which he served as the first chairman. Wise spent 21 years on the athletics council, and he also spent 19 years as the Wright State faculty representative to the NCAA.

Reflecting on Wright State’s basketball program over the years, Wise believes Gary Monroe, a junior college transfer who helped the Raiders earn the 1983 NCAA Division II championship, was the best player in Raiders history. He said that although the Raiders won an NCAA title with Monroe, the greatest team might have been the 1986 squad that lost in the national quarterfinals. Their 28-3 record is the best in Wright State history. The biggest upset was the 1999 home win against Michigan State in the year the Spartans went on to claim the Division I NCAA championship.

Some basketball games in recent years are also fond memories for Wise. The most exciting games were the two wins against Butler in 2007, when the Raiders excited a sold-out Nutter Center with last-second victories on the way to the Horizon League tournament title and a berth in the NCAA. “A lot of that was because of DaShaun Wood. He was one of my top five players in Raiders history. He just wouldn’t let us lose.”

After all these years, Wise also maintains a passion for academics. “I love teaching these kids and interacting with the youth,” he said. “I don’t view it as a job; I love them all.”

He knows the road well from his home in Piqua to the Wright State campus. When Susie, his wife of 29 years, was pursuing her master’s degree in nursing, Gordie would drive her to campus twice a week for classes while she studied with a clip-on light in the car. Their blended family of his four children and her three daughters has provided the couple with 15 grandchildren and countless memories.

Meanwhile, Wise is looking forward to the start of another hoop season with “high hopes” for new men’s basketball coach Billy Donlon.