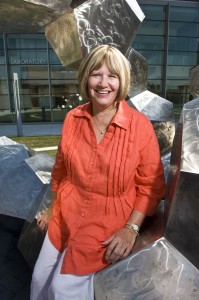 Mathies served as associate dean of the College of Education and Human Services from 2000 until her move to Lake Campus in 2007. She was responsible for overseeing the $10 million renovation of Allyn Hall, Wright State's first building.

Bonnie K. Mathies, Ph.D., has been appointed dean of the Wright State University Lake Campus effective May 1, 2011. She has served as interim dean since August 2010 following three years as associate dean of the Lake Campus.

“Dr. Mathies has shown her dedication to this university and its students for more than three decades,” said Wright State Provost Steven R. Angle, Ph.D. “Her excellent reputation as an educator and administrator make her an excellent choice for this role.”

Mathies began her career as a teacher in Oberlin City and Toledo Public Schools, where she spent 10 years. In 1974, she came to Wright State as an instructor in the College of Education and Human Services (CEHS). She became chair of educational technology and allied programs in 1988 and assistant dean for communication and technology in 1994.

Mathies served as associate dean of the CEHS from 2000 until her move to Lake Campus in 2007. She was responsible for overseeing the $10 million renovation of Allyn Hall, Wright State’s first building.

She has received numerous awards and honors throughout her career, including the Faculty Excellence Award from the Southwestern Ohio Council of Higher Education, the Jan Schneider Award for Excellence in Educational Technology from the Southwestern Ohio Instructional Technology Association, and an Award of Merit from the Ohio Educational Library Media Association. Mathies has also been published in several academic publications.

Mathies earned her bachelor’s, master’s and doctoral degrees from the University of Toledo. Her teaching areas include educational technology leadership, school library media and educational computing.