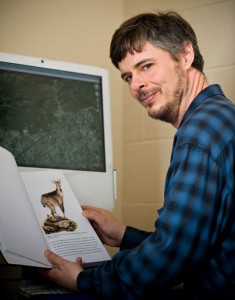 Professor Rooney and his graduate students are working to save the grey goral.

A rare Himalayan goat-like animal called the grey goral, threatened with extinction in Pakistan because of population and hunting pressures, is getting some help from Wright State University.

Graduate students in a population ecology class taught by assistant biology professor Thomas Rooney are using quantitative and sophisticated techniques they’ve learned to analyze the problem in hopes of helping protect and preserve the goral.

“There are probably no ramifications of losing the grey goral that are any worse than losing the Mona Lisa or demolishing the Louvre,” said Rooney. “It’s largely aesthetic. It’s something that enriches our world, enriches our culture.”

The goral is a small, rough-haired, cylindrical-horned animal that typically lives 14 to 15 years. Up to 4.5 feet in length and weighing up to 92 pounds, it has a gray or gray-brown coat with tan legs, lighter patches on its throat and a single dark stripe along its spine. Its backward-curving horns can grow up to 7 inches. Males have short manes.

There are fewer than 1,000 gorals left in Pakistan, according to a Pakistani native and Wright State post-doctoral student who conducted field surveys over three years at great personal risk to himself. Fakhar-i-Abbas counted the gorals in one of the most dangerous parts of the world, a place populated by terrorist groups and hostile mountain tribes.

“He was kidnapped and held for a week by a tribal group,” Rooney said. “He has had run-ins with the Taliban. He’s had bombs go off within two blocks of his offices.”

The gorals are found in the forests of the Himalayas, with groups typically occupying a territory of roughly 100 acres at elevations of about 10,000 feet. They feed on leaves and grasses and usually rest on rock ledges through the day.

“Their habitat is getting further and further compressed,” Rooney said. “And now that we have more people in the areas of goral, there is more hunting pressure.”

The most practical way to count animals is to deploy a network of motion detectors that trip cameras and photograph the animals. However, such “camera traps” are too expensive to use in Pakistan and would be subject to theft.

So Abbas was forced to count the gorals by hand using a spotting scope. The goral is very agile and can run quickly. And due to its coloration, it is very well camouflaged and difficult to see, especially since it spends much of the day lying still.

“He would go out on these 30- and 40-mile treks, do loops and do the census work – for three years,” Rooney said. “He WAS the remote camera. This is a technique you might have used in the 19th century for doing census work.”

And then there were the hazards, like when Abbas was kidnapped by a tribal group.

“They kept moving us to different places, and it was very painful to live in the cold without any flooring,” he recalled. “We were guarded by furious dogs. Walnuts and boiled rice was the only food they provided us. By the third day, my kidney got infected and almost failed.”

A regional politician was able to secure Abbas’ release.

Rooney’s students are using field data on goral birth and death rates, then factoring in changes in habitat availability to build a range of forecasts and assess the likelihood of extinction in a given time frame.

“Because of Wright State, research quality is much improved and we are having a greater influence on the government to consider serious steps for the conservation of this species,” he said.

Abbas founded the Islamabad-based Bioresource Research Center, which now has about 55 employees. It is a conservation organization that also serves as a wildlife service that does fieldwork for the Pakistan government.

One of Abbas’ other projects includes doing surveys aimed at preserving Pakistan’s vultures.

In the early 1990s, the number of vultures in Pakistan began to plummet dramatically. In five years, the population had declined by 99 percent for some species, resulting in what conservation groups called the “Asian vulture crisis.”

Rooney says it turned out that a new anti-inflammatory drug being given to livestock to fatten them up was toxic to vultures, which were eating dead livestock. A more recent problem is that livestock previously left out for vultures is now being sent to plants for processing as chicken feed.

Over the past 10 years, Abbas has been doing surveys in which he counted dead wildlife that can be seen from a 1,000-mile stretch of major highway from Islamabad to Karachi.

“Basically, all the dead livestock have completely disappeared from the side of the road,” Rooney said. “What’s happened now is the traditional food source of vultures is now disappearing. If this problem isn’t addressed, you’re not going to be able to recover the population.”

Rooney said that if the vultures disappear altogether, it could give rise to packs of wild dogs. That could pose a threat to human health because the dogs can carry rabies and other diseases.

Rooney said vultures are also critical for a religious ceremony held by the Parsi tribal group. The Parsis believe the Earth should not be polluted by human corpses, so they don’t bury their dead. Instead, they build mountaintop structures called Towers of Silence and let vultures consume the bodies.

“But now there are not enough vultures to eat the dead,” Rooney said.