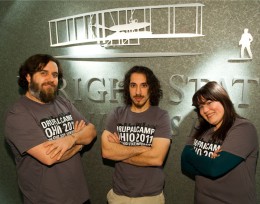 You may have noticed that the Wright State University homepage (http://www.wright.edu) has recently undergone a major facelift.

The university’s web team has been hard at work transitioning the Wright State website to a content management system called Drupal. Recently, three web team members shared their efforts at DrupalCamp Ohio 2011, a gathering of web professionals from around the state who use Drupal software.

A content management system (CMS) is a database-driven way of organizing and managing large volumes of content on a website. In a CMS, a variety of users can be assigned varying levels of control. Users will be able to make changes to pages they control without needing to do complicated programming or write code.

“So it will broaden the number of people on campus who can directly edit content on our site,” said Jessica Sparks, Wright State’s web designer. “This will allow our content to be fresher and more current.”

A university committee first began looking at different CMS software in August of 2009. They ultimately selected Drupal and the web team began using it last spring.

“Drupal was the best choice for us because it allows us to give our users exactly what they want,” said Mark Anderson, Wright State’s senior web administrator.

Anderson explained that Drupal is scalable, flexible and easy to use. It has advantages for search engine optimization and accessibility. It will give the university better control of its branding because all the site’s pages will have a consistent look.

“Plus, it’s open source, meaning we’re not paying any licensing fees,” he added.

Drupal is widely used in both the private and public sector. Good examples of Drupal-built sites are whitehouse.gov and examiner.com.

Wright State is one of the first universities to use Drupal 7, the newest version of the software. That’s drawing attention from the local business community.

“I was so excited when I heard that Wright State was considering Drupal to revamp all of its web properties,” said Nathan Rambeck, web architect at Crown Partners consulting firm in Dayton. “As a thriving open-source project with an active community of developers, Drupal will help Wright State stay on the cutting edge of web technology and meet the expectations of an increasingly web-savvy student population.”

Before beginning to use Drupal, the Wright Sate web team did an extensive user experience study. They used various analytics along with focus groups and individual interviews to determine user needs and behaviors. The team also compared the site to those of competitor institutions. 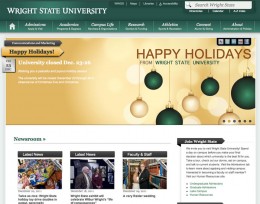 The first pages of the website converted to the new official template went live in September.

The team created a custom webpage theme based on those months of research. The first few hundred top-level pages of wright.edu were converted to the new official template and went live in September. The web team has a multi-year implementation plan for converting the rest of the website into Drupal.

“We literally have hundreds of thousands of pages left to do,” said Sparks.

The team led two of the conference’s 17 breakout sessions. At the first session, Anderson and Sparks discussed how Drupal has made the Wright State website more accessible to those with disabilities.

“Nearly 25 percent of Internet users have some sort of disability, yet only 1 percent of sites on the Internet are accessible,” said Sparks.

As a university that prides itself on its accommodations for students with disabilities, it was important for the web team that the new site follows that philosophy.

Drupal supports technologies such as semantic web RDFa tags, which facilitate the development of highly accessible sites. ARIA tags have been added to the theme, which help devices like screen readers understand the functions of elements of a site, giving them a human context.

The team also used Drupal to create an “accessibility toolbox” on the homepage. By clicking on “Accessibility” near the top of the homepage, users can customize their experience by selecting a text-only or a high-contrast version of the site.

At their DrupalCamp session, Anderson and Sparks explained how the Wright State website is developed to accommodate various disabilities. They discussed specifically how they used Drupal to accomplish their accessibility goals. 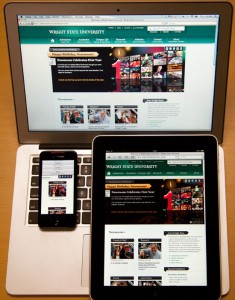 Responsive design in action: the Wright State homepage on a laptop, an iPad and an Android smartphone.

In the second session, Singh focused on Wright State’s mobile presence and the concept of responsive design.

Traditionally, a company or an organization develops a website for desktop systems, explained Singh. If the company can afford it, it also develops a separate code base that can be viewed from a mobile device like a smartphone.

Now, however, with the myriad of different mobile devices on the market, developers need to be able to design a single site that can adapt to various screen sizes.

“That’s responsive design,” said Singh. “One site, one set of code, behaves differently based on how it’s being viewed.

Singh explained that his presentation focused not on the advantages of responsive design, but on how to actually do it. He showed how Wright State is using Drupal to create responsive design on its website.

Wright State’s appearance at DrupalCamp is just a small step on a journey to radically redesign the university’s web presence, which will ultimately change the way users interact with its site for years to come.

“Besides the original creation of wright.edu, the decision to move to a content management system is probably the largest milestone for the web at Wright State,” said Sparks.