Individual award winners and teams were honored for their exceptionally meritorious achievement in state, regional, national or international academic forums. 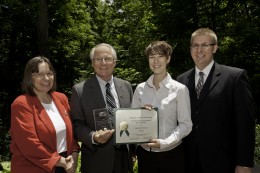 Lara earned 3rd runner-up in the international 2012 Dell Magazines Awards for Undergraduate Excellence in Science Fiction and Fantasy Writing. This will be her fourth consecutive Presidential Commendation award for writing excellence.

Andria was selected to receive a travel award to attend the American Chemical Society’s Division of Polymer Chemistry’s Undergraduate Research in Polymer Science Symposium and present an abstract and Polymer Preprint on her research. She is also the only co-author on a manuscript recently accepted for publication in the journal Polymer (Elsevier Publishers) in June 2012.

Sheila was chosen as the 2011 Post-Secondary Outstanding Business Student in the Nation by the Association for Career and Technical Education. She also serves as the Ohio post-secondary state president for Business Professionals of America.

Julia’s research discoveries resulted in four scientific abstracts and a presentation at the 2012 Experimental Biology Meeting. Those efforts so impressed The American Physiological Society that the organization has dedicated a Featured Topics Symposium to the subject matter at their 2013 meeting.

One of the top graduate students in the college, Xue’s role in the cognitive radio research group has resulted in the publication of five journal articles and 12 conference papers over the last three years.

Ajith led the research for the development of The MobiCloud Project, which won the technology award at the Fukuoka Technology Ruby Competition. This selective international competition attracted 82 entries from nine countries, and Wright State was the only academic organization among all of the winners.

Joe won one of the competitive Caroline tum Suden/Frances Hellebrandt Professional Opportunity Awards for his research abstract presented at the Experimental Biology Meeting. Recipients are first author on submitted abstracts, and include a pool comprised largely of Ph.D., medical and post-doctoral students.

A senior honors student, Rehab was selected to participate in the Bioengineering Education Research-Research Experience for Undergraduates (BER-REU) program at Northwestern University. The program, supported by a grant from the National Science Foundation, had more than 100 applicants from which nine were chosen.

Andrea received the National Association of Social Worker’s Dayton Area Student of the Year Award. She also produced a poster presentation on research she has conducted on the strengths of a home-environment approach to nursing care.

A senior honors student, Luke has had three works of fiction published in the genres of horror, suspense and magical realism. Publishers include Pine Hill, and Static Movement Press. He is working on his first novel and will begin a Master of Fine Arts in Creative Writing in the fall of 2012.

A senior honors student who aspires to a career in television broadcasting, Brandy was selected as the winner of the Dayton CW Star Competition. Chosen from a pool of more than 100 applicants, Brandy will represent the CW’s Dayton affiliate, WBDT-TV, over the next year.

Business Professionals of America
Following their success at BPA’s state competition, five Lake Campus students attended the national competition in Chicago and returned with 12 awards ranging from first place to Top 10 rankings in categories that included Advanced Interview Skills, Human Resources Management, Graphic Design Promotion, Desktop Publishing and,   Fundamental and Advanced Word Processing. The Lake Campus Chapter also received the Quality Chapter Award which is given to the top 2 percent in the nation for their outstanding activities.

Institute of Management Accountants (IMA) National Student Case Competition
For the 15th time, Wright State University’s accountancy team has advanced to the Final Four in the IMA’s annual competition which will be held in late June 2012. Teams from Wright State have won this competition five times—more than any other university.

Nominated by: James Greenspan, Ph.D., chair of the Department of Accountancy, and Richard Williams, Ph.D., associate dean of the RSCOB

Nominated by: James Greenspan, Ph.D., chair of the Department of Accountancy, and Richard Williams, Ph.D., associate dean of the RSCOB

Incubator for the Democratic Republic of the Congo Senior Design Team
This three-member team of Biomedical Engineering students was one of 24 teams chosen from universities across the country to compete in the 2012 Rice University Global Health Technologies Design Competition. The team’s infant incubator prototype is the product of their capstone senior design project, and was developed in response to the medical needs of the refugee, indigent and orphan population of Goma in the Democratic Republic of Congo. The students’ prototype so impressed the physician who directs outreach efforts there that three additional incubators were built for transport to the Congo in June.

Nominated by: Lisa Crawford, lecturer and team advisor, and Bud Baker, Ph.D., professor and interim chair of the Department of Management.