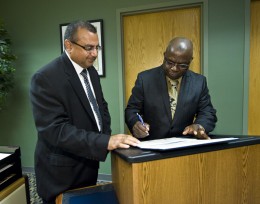 Wright State University will host senior and up-and-coming leaders from African nations under a new agreement with an African leadership organization.

Wright State’s Institute for Defense Studies and Education (IDSE) and its Center for Professional Education (CPE) recently signed a memorandum of understanding with the African Leadership Institute to house its U.S. headquarters and provide leadership training programs.

One of its first projects is planning a leadership summit in Washington, D.C., for African leaders in 2013, Sethi said.

Sethi signed the agreement on Sept. 12 with Iyorwuese Hagher, Ph.D., founder and director of the African Leadership Institute. Hagher has held several Nigerian academic and government positions, including ambassador to Canada and Mexico.

In the signing ceremony, Hagher said leadership is a scarce resource in Nigeria and across Africa.

“Once in a while you have a Nelson Mandela (former president of South Africa), who becomes an icon for the world. You have people like Kofi Annan (Ghanaian diplomat and former United Nations secretary-general), and you have the first generation of African leaders that fought against colonialism and got independence,” Hagher said.

“But after that, you had people who were gladly looking for positions, and once they got in these positions they used them to enrich themselves and their families,” he said.

Hagher said he created the African Leadership Institute to teach the qualities of leadership to officials and executives of all African nations. Looking for international support, “We came to Wright State University and found this idea was acceptable,” he said. “We decided to make this our anchor.”

Sethi said the institute expands Wright State’s growing international relationships.
“We’ve known that regional universities have created programs in Europe and the Far East. But the African continent is just as rich with opportunities.” he said.

Jill Lindsey, Ph.D., chair of the Department of Leadership Studies in Education and Organizations, said the institute is a good opportunity for the leadership development master’s degree, a relatively young program begun in 2009. “This is where we were hoping to grow the program. We are really eager to work together to fill the leadership void globally,” she said.