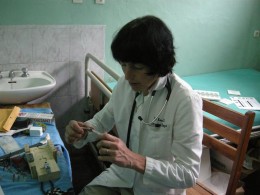 Dr. Sylvia Gleason, a Wright State alumna making eyeglasses for patients in the Democratic Republic of the Congo.

The ravaging violence and civil strife that plague eastern Africa have created a humanitarian crisis that is consuming the African continent. Malnutrition and disease run rampant. This is especially true in the Democratic Republic of the Congo (DRC).

Survival weighs heavily on the minds of millions of Congolese every day. Recognizing the urgency, Dr. Sylvia Gleason, a Dayton physician and Wright State alumna, heeded her moral obligation to provide aid to the DRC.

According to the Project Congo website, medical attention and relief have been brought to thousands of people by those involved. 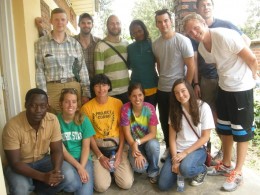 Dr. Sylvia Gleason (yellow shirt) and the eleven students and professor who traveled with her to help. Four were from the Wright State engineering program.

“Our medical goal this year was to set up an X-ray machine and darkroom at both Project Congo Hospital in Goma and St. Vincent’s in Bukavu,” said Gleason. “Neither hospital had the ability to take X-rays and some of the younger doctors had never even read X-rays before.”

The technology and medical equipment that was brought to the DRC is very dependable, yet affordable, and can be easily repaired with local materials.

“We used a simple portable veterinary X-ray machine and had a local welder build a stand for it on site,” said Gleason. “For the darkroom, we used a large plastic tote that served as our sink, and a couple of five-gallon cans for our chemical tanks.” 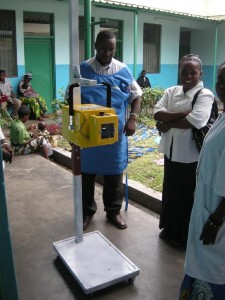 Despite the limited medical resources, the students’ innovation helped them treat growing maladies like typhoid fever, malaria, tuberculosis and malnutrition.

Many unorthodox objects were fashioned into crucial medical equipment; as examples, the students turned jerrycans into developing tanks and water bottles into sharps containers.

“After seeing how disorganized the hospitals were, the students started packing a daily backpack with emergency and essential supplies,” said Gleason.

In one instance, fast access to the backpack and its medications and supplies saved an infant’s life at St. Vincent’s. The newborn was stabilized, but needed to be kept warm. The students, under pressure, came up with making her a hat, leg warmers and arm covers out of tube socks.

No matter how diligently the students would work, medical procedures and operations would be constantly interrupted because of multiple power outages a day.

“Some days, we would only have an hour or two of electricity,” said Gleason.

However, Gleason said that Congolese physicians are used to it. Oftentimes, surgeries persist, be it by kerosene lamp or firing up a generator.

Although extreme poverty, malnutrition and disease continue to afflict millions of Congolese, Project Congo is making strides to provide medical relief to the war-torn nation.

Gleason plans to return to the Democratic Republic of the Congo with another group of Wright State medical students this coming February.

To learn more about the conflict in the DRC and how to get involved, visit http://projectcongo.org/home.html.