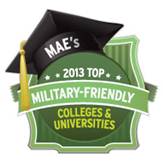 One of the most prominent online resources for current and prospective military students, Military Advanced Education (MAE), has named Wright State University “military-friendly” for its continuing commitment to serve the men and women who serve and have served our country. It is the fourth consecutive year the university has received the honor.

Amanda Watkins, Wright State assistant director in the Office of Veterans Affairs, said the designation is another stamp of approval that Wright State’s goals and service are among the nation’s leaders in terms of addressing the needs of military students.

“The Office of Veterans Affairs is honored to receive this designation for the fourth consecutive year. This honor affirms the university’s commitment to serving our veterans and military-connected students,” said Watkins.

This is the second time in the past three months that Wright State has been recognized as being military-friendly for the fourth consecutive year by a military publication. G.I. Jobs, the premier magazine for military personnel transitioning into civilian life, also awarded Wright State the designation of Military-Friendly School again in September.

The university offers an array of resources to help students transition to campus. Wright State awards educational credits for military training and experience, and has designed courses open only to veteran and military students. It also delivers high-quality career services to best express military experience and helps veterans connect with other students through campus events, housing options and student clubs.