Psychology student focused on achievement, changing lives of others, not her personal loss

Nautica Hereford got the phone call we all fear. Her sister back home was on the other end of the line. Their mother, she explained, had been gazing out her front window when a stray bullet took her life.

“You get two paths. You get path A, and path B,” said Hereford. “And a lot of people when they are in pain, they take that easy path, path B. Well, I want to show people that path A, it may be harder, but it’s well worth it in the end.” 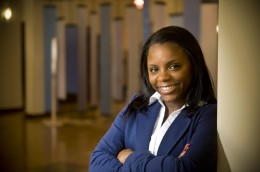 Wright State psychology student Nautica Hereford is determined to succeed but insists on helping others too.

A sophomore psychology major with a 3.6 GPA, Hereford has lost much in life, but the Cleveland native refuses to let her hardships become reasons for failure. Instead they motivate her to give back.

“There are so many excuses I can use. My heart hurts. Or I’m tired,” said Hereford. “I take my studies seriously because I feel as though that is what I’ve earned. People can take so many things away from me, but they can’t take away my hard work, the long hours, the sacrifices that I’ve put in.”

A beneficiary of Wright State’s Paul Laurence Dunbar Scholarship and several other sources of aid, Hereford is determined to make good on those investments and much more.

“I don’t think my Wright State story has really started yet,” said Hereford. “By the time I graduate, I want to be remembered as a student that not only achieved but also as a student who brought people along the way, somebody who raised others up too.”

Hereford is drawn to psychology because of that passion—her drive to help others, particularly those like her, who have worked hard to overcome long odds, but still need help.

In just a few days, Hereford will be halfway through her bachelor’s degree. Her first two years have been hard, but they have only strengthened her resolve.