Biology students return from the Amazon with new perspective 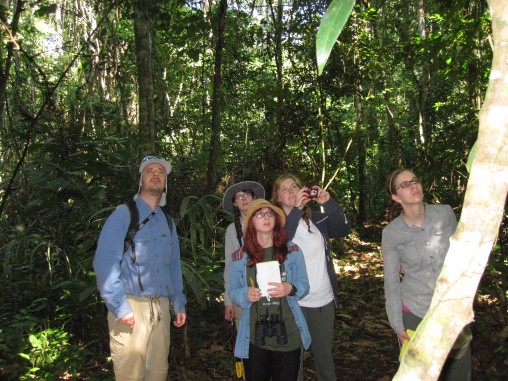 Students were asked to spot and identify numerous plant an animal species on the trip.

Imagine standing alone in the pitch black Amazon jungle unable to see your hand inches in front of your face, but acutely aware of the symphony of nocturnal forest sounds.

It was a life-changing experience for graduate student Emily King and seven other biological sciences students this summer when they traversed remote parts of the Peruvian jungle during a field study trip for their Tropical Field Ecology class.

“That is a darkness that cannot be described,” said King. “You could hear every single noise, every leaf fall, every insect, frog, monkey, bird, everything. It was alive with activity, even in the dark.”

The purpose of the nighttime excursion is part of what Tom Rooney calls two-eyed vision. “By the time we leave, I want the students to try to see the jungle as both a visitor and a native,” said Rooney, associate professor of biological sciences. 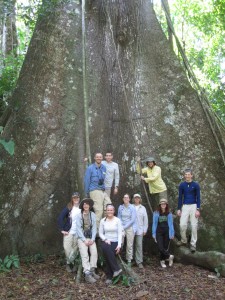 Emily King, front row, third for the left and Tom Rooney, Ph.D., back row, first on the left with the class standing at the base of an enormous sumauma tree.

It’s the fifth time Rooney has organized the trip for biology undergraduate and graduate students, many of whom have never taken such a trip.

The two-week class requires a three-day journey from Dayton to Manu National Park in southeastern Peru. It’s designed to give students a firsthand knowledge of tropical rainforest natural history. Students learn to identify many of the animals by sight and some of the more important plants. Rooney said he wants students to learn how to make good critical observations, log them in a field journal and organize them into hypotheses that can be tested. But most of all he wanted them to experience the jungle.

“You’re putting students into a place they’ve read about, sure, but a place where everything is just so much larger and more intense than they ever could have imagined,” said Rooney. “You can see the rainforest on PBS, but when you are there, experiencing the heat of the sun, the humidity, the cycling temperatures, and you hear the monkeys rustle in the trees ahead of you and you try and get good looks at them and you start chasing monkeys through the forest…there’s just no experience like that.”

The sounds of the jungle are a big piece of that experience. Even in the day, the forest is so dense that you can’t see more than 10 to 15 feet. The result is a raised awareness of the ever-present jungle sounds both day and night. 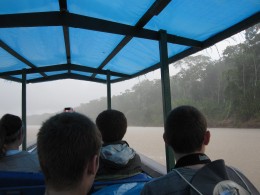 Once they arrived in Peru, the class traveled almost exclusively by boat because there were virtually no roads to use in the in Manu National Park.

This year, the group got a few rare glimpses of a jaguar in its native habitat. Students also observed many species of monkeys, over 130 species of birds. They even saw a pack of South American giant river otters chase an eight-foot crocodile out of the lake when it got too close to their nesting den.

“It was more than I expected. It was thrilling to see all of the species in their own environment,” said King, who had never traveled before. “Who can say they’ve seen a leopard in its native habitat?”

The trip was so thrilling that King was surprised by an unexpected feeling when it was time to leave.

“It feels weird to admit, but I didn’t want to come back home,” said King. “It was like a calming experience. I had no stress there. I had the best sleep. I felt like I was in my element.”

Rooney said their trip follows in the footsteps of many of history’s greatest biologists. An experience that usually results in at least a couple of the students choosing to pursue graduate degrees in ecology.

“Every biologist as part of their professional training should go to the tropics,” said Rooney. “It’s an exciting field because you really are traveling to frontier places, and you see the students transformed by that experience.”

This was the airport the class used when they landed in Peru—literally a single, grassy runway carved out of the jungle.

Once they arrived in Peru, the class traveled almost exclusively by boat because there were virtually no roads to use in the in Manu National Park.

The Amazon is home to tens of thousands of the world’s plant species.

Students were asked to spot and identify numerous plant an animal species on the trip.

Emily King, front row, third for the left and Tom Rooney, Ph.D., back row, first on the left with the class standing at the base of an enormous sumauma tree.