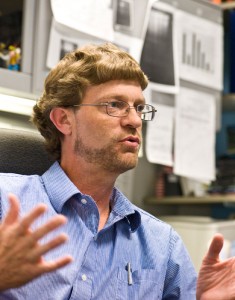 Thomas L. Brown, Ph.D., a professor and vice chair for research in the Department of Neuroscience, Cell Biology and Physiology, was appointed as a full member of the NIH Pregnancy and Neonatology Study Section, Center for Scientific Review

The National Institutes of Health has named Thomas L. Brown, Ph.D., a Wright State University researcher investigating the causes of pregnancy-associated disorders leading to premature births, to its prestigious pregnancy study section that is instrumental in national biomedical research.

Brown, a professor and vice chair for research in the Department of Neuroscience, Cell Biology and Physiology, was appointed as a full member of the NIH Pregnancy and Neonatology Study Section, Center for Scientific Review from July 1, 2013, through June 30, 2019. Brown will review grant applications, make recommendations and survey the status of research.

“Selection to serve as a full member of the Pregnancy and Neonatology Study Section is a tremendous honor, as it highlights the national recognition and standing our research program in pregnancy-associated disorders has here at Wright State University,” Brown said. “While serving as a study section member involves a substantial time commitment and a high level of responsibility, the ability to be surrounded by the brightest minds on the cutting edge of groundbreaking research is truly exciting and inspiring.”

Richard Nakamura, director of the NIH’s Center for Scientific Review, said Brown was nominated because of his demonstrated competence, objectivity and achievements as evidenced by the quality of his research, publications in scientific journals and other significant scientific achievements.

In 2011, the NIH awarded Brown a five-year grant of more than $1.5 million to investigate the underlying factors that can cause preeclampsia and pregnancy-related disorders that lead to premature birth.

About 12.7 percent of all babies born in the United States are preterm, according to the March of Dimes. The rate has increased 36 percent in the past 25 years, partly because of an increase in elective caesarean sections, an increase in older mothers and the growing use of assisted reproduction, which increases the risk of multiple births. Preeclampsia occurs in about seven of every 100 pregnancies.

Preterm babies are born earlier than 37 weeks into a normal 40-week pregnancy; however, exactly what causes premature births has long baffled experts.

Premature babies can face a number of challenges, including extensive hospitalization, breathing problems because of underdeveloped lungs, undeveloped organs and greater risk of life-threatening infections, as well as an increased possibility of long-term complications, according to the National Institute of Child Health and Human Development.

The conditions that lead up to premature births also pose serious health risks to the mother, causing high blood pressure and potential kidney damage or failure.

Brown obtained his Ph.D. in Developmental Biology from the University of Cincinnati and did his post-doctoral work at Cincinnati Children’s Hospital Medical Center and the Cleveland Clinic Foundation.