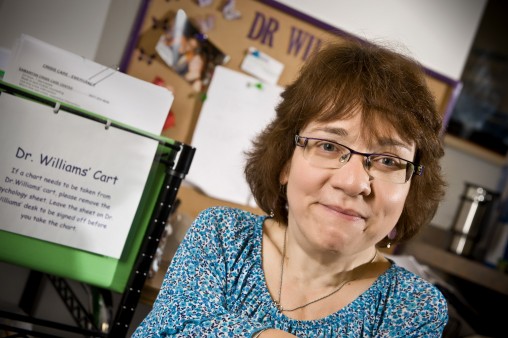 Julie Williams believes some people want to ignore disability because they see it as a vulnerability and don’t want to think about not being in control of their bodies or minds.

In Bolivia, they are called “second patio children”—kids with disabilities who are kept out of sight by their families, away from the main patio.

A movement to overcome the stigma of disability, eliminate the social injustices it creates and open up educational opportunities for disabled children is picking up steam in the South American country. And Wright State University will soon be part of it.

Julie Williams, a board-certified rehabilitation psychologist at the School of Professional Psychology, has accepted an invitation to accompany an Ohio group to a Bolivian elementary school, where she will help educate and train teachers and others on disability attitudes.

“It’s all geared toward integrating children with disabilities into the schools,” Embree said of the trip. “We’re also going to be looking at the physical accessibility of the school.”

The group is scheduled to begin the nine-day trip July 20, flying over the Andes mountains, landing in the Bolivian capital of La Paz before continuing on to Santa Cruz,  a city in the flatlands of eastern Bolivia.

Williams said some Bolivians believe that having a disability is a shameful thing. As a result, children with disabilities are often hidden away from society and given limited educational opportunities.

“That combined with not having money or resources makes the lives of people with disabilities much more vulnerable to abuse, lack of access, poor quality of life,” she said.

Last year, scores of disabled people on crutches and in wheelchairs fought police in La Paz over demands for better welfare support, injuring several and fueling anger against the state. A caravan of about 50 adults and children ended a 1,000-mile, 100-day trek through Bolivia at the protest near government offices.

Teachers at the elementary school near Santa Cruz want to learn how to better help their students who have disabilities. Williams has the tools to help.

Williams said some people want to ignore disability because they see it as a vulnerability and don’t want to think about not being in control of their bodies or minds. They frequently acknowledge feeling pity for people with disabilities and treat them accordingly.

“We’re socialized to believe certain things about disability,” Williams said. “What a different world we would be in if some of those beliefs were challenged and disability normalized as everybody’s inevitable experience.”

At the school, Williams plans to take a pre-attitudinal survey with the teachers that captures their beliefs about people with disabilities and do another survey afterward to see if there is any shift. In between, the teachers will hear presentations on disability attitudes, access issues and teaching strategies. Then they will be part of a brainstorming session to create an action plan. Williams hopes to publish about the trip when she returns to Wright State.

“I’m hoping someone gets a view of what it could be like for children with disabilities and some powerful voices get generated in Bolivia, some collective voices, and that they start demanding changes,” Williams said. “I think we’re in for an emotional kind of an experience. It’s going to be hard.”