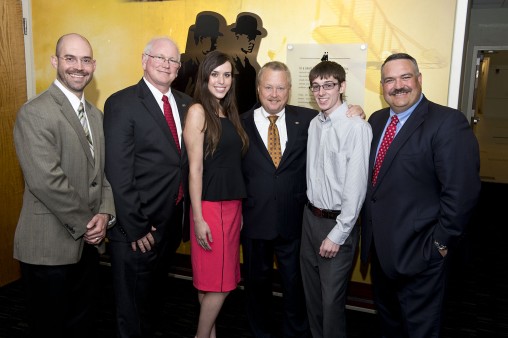 When Shaylah Mutschler was deciding where to attend college, a scholarship offer became the determining factor. “The Reynolds and Reynolds scholarship sealed the deal for me,” said Mutschler, a December 2012 graduate of Wright State University’s College of Engineering and Computer Science.

When she entered Wright State in fall 2009, Mutschler was among the first five high-achieving high school graduates selected from Dayton and the surrounding region to participate in the Reynolds and Reynolds Leadership Scholars program. “It was a great way to start off school,” recalled Mutschler, who majored in computer engineering.

Thanks to a $400,000 pledge from the Reynolds and Reynolds Company Foundation, 40 additional Wright State students will join the ranks of Reynolds Scholars. The company recently committed to donating $80,000 per year over the next five years through the Reynolds Foundation to continue student scholarships in Wright State’s College of Engineering and Computer Science. Each student will receive a $2,500 scholarship renewable for three years, based on rigorous academic requirements.

“Our commitment to honor scholarships is a centerpiece of our involvement with Wright State University,” said Willie Daughters, senior vice president at Reynolds and Reynolds and a member of the Reynolds Foundation’s board of trustees. “The reason is simple: We believe these scholarships are the best way to have a direct impact on the lives of young men and women, on our communities, and on the university’s ambition to attract a pool of highly talented students.”

One of the first Reynolds Scholars to graduate, Mutschler is currently employed as a software engineer at Applied Optimization, Inc., an engineering research and development firm in Dayton. Mutschler develops algorithms and coding for the unique characterization and identification of satellites and space objects. “It’s opened my eyes to a whole different spectrum of possibilities,” she said. “It’s very cool to see that I can tie what I learned at Wright State into something like this.”

As she reflected back on her college experience, Mutschler was especially grateful to Reynolds and Reynolds for their support of her education. “Their contributions made a huge difference in my life,” she explained. “I hope they understand how much they impact the life of every single person they give a scholarship to. I hope they receive joy from seeing people graduate and go on to have successful careers.”