Wright State scientist/alumnus among those honored by President Obama 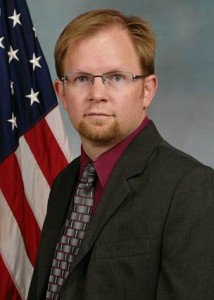 Greg Pitz, who obtained his bachelor’s and master’s degrees in physics from Wright State University, was among those honored by President Obama as among the nation’s outstanding early career scientists.

Pitz, Ph.D., an associate research physicist at the Air Force Research Laboratory at Kirtland Air Force Base in Albuquerque, N.M., was among 102 researchers who were honored. The award is the highest honor bestowed by the U.S. government on science and engineering professionals in the early stages of their independent research careers.

“The impressive achievements of these early stage scientists and engineers are promising indicators of even greater successes ahead,” Obama said. “We are grateful for their commitment to generating the scientific and technical advancements that will ensure America’s global leadership for many years to come.”

Pitz received the honor in the Department of Defense category. Other recipients on the category included researchers from Stanford, Princeton and other top research institutions. The honorees will receive their awards at a Washington, D.C., ceremony later this year.

“It is a huge honor to receive this award,” said Pitz, “but it wouldn’t have been possible without the support of my wonderful academic advisors and mentors along the way.”

The awards embody the high priority the administration places on producing outstanding scientists and engineers to advance the nation’s goals, tackle challenges and contribute to the economy. Established by President Clinton in 1996, the awards honor researchers who pursue innovative research at the frontiers of science and technology and are committed to community service through scientific leadership, public education or community outreach.

Pitz received his B.A. and M.S. degrees from Wright State in 2001 and 2004, respectively. In 2010, he obtained his doctorate from the Air Force Institute of Technology, where he conducted research in the development of electric hybrid lasers. His current research interests include optically pumped alkali lasers, hollow core fiber lasers and atomic and molecular spectroscopy.