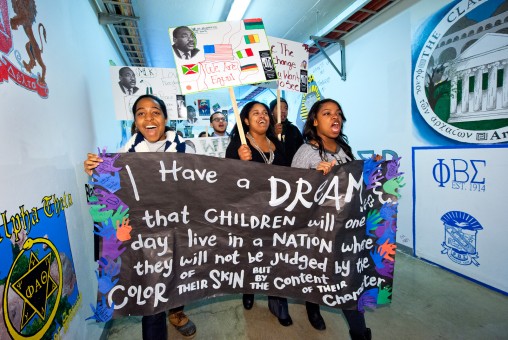 Students, faculty and staff marched through the Wright State campus tunnels as part of the university’s MLK holiday week celebration.

Marchers celebrating the legacy of Martin Luther King Jr. filled the tunnels of Wright State University as part of MLK holiday week, delivering a message of peace, unity and action.

About 50 singing and chanting students, faculty and staff on Jan. 23 marched from Millett Hall, taking a circuitous underground route that ended with a rally in the Student Union Endeavour Room. Along the way, the marchers Chinese-dragoned through the Union Market cafeteria to the surprise and delight of diners.

Dana Patterson, Ph.D., director/lecturer of the Bolinga Black Cultural Resources Center, said the goal of the march was to use the momentum of the civil rights movement to raise awareness about current issues such as human trafficking, equal transportation and affordable health care.

King—a clergyman, activist and prominent leader of the African-American Civil Rights Movement—received the Nobel Peace Prize for his efforts to end racial discrimination. He was assassinated in 1968. In 1986, Martin Luther King Jr. Day was established as a U.S. federal holiday.

The traditional outdoor march at Wright State was scrapped due to the subzero wind-chill temperatures. The tunnel route enabled the group to touch different parts of the campus community and pick up a few marchers along the way.

The MLK march concluded in the Student Union with a rally and discussion.

The marchers carried signs bearing phrases such as “We Must Learn to Live Together as Brothers and Sisters, or Perish as Fools.” The narrow confines of the tunnels amplified the voices of the marchers as they sang “We shall overcome” and “Black and white together, we shall not be moved.”

Following the rally in the Endeavour Room, the group broke into small groups and discussed issues and ideals such as King’s dream, freedom, co-existence, African culture and the importance of education.

Sukhmanjit Singh, president of Wright State Student Government, urged those at the gathering to become activists.

“Martin Luther King Jr. had a dream, but he also had an action to complete his dream,” Singh said. “The dream is not complete yet and probably won’t be for awhile. But what has to happen is there have to be activists in each generation to complete that dream.”

“Poverty and prejudice continues to eat away at our society, and it’s not going to change unless we follow Dr. King’s example and work together to eliminate the injustices that are threatening to tear our country apart,” Hopkins said.

The march and rally capped a week of activities at Wright State to honor King.

On Jan. 21, a forum was held at Millett Hall on social awareness titled “Building the Beloved Community.” On Jan. 22, there were three showings of the documentary film titled Letter from Birmingham Jail.