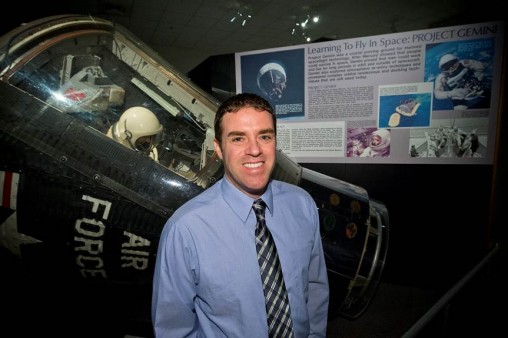 NASA’s high-flying observatory enables astronomers to peer deep into the heart of the universe. And when the observation plane’s garage-door-sized panel opens at 45,000 feet this spring to put its infrared telescope into action, Wright State University alumnus Tom Jenkins will be on board.

“I expect the experience of a lifetime; it will be a chance to geek out with some super brilliant people,” Jenkins said. “I also expect to grow as a teacher.”

Jenkins, 39, teaches science at Indian Valley Middle School in Enon, Ohio. He will join Heidi Steinbrink of Oakwood High School in Dayton on the flight of the Stratospheric Observatory for Infrared Astronomy, or SOFIA, beginning May 4. It is part of NASA’s flying-classroom-for-teachers program.

“One of the things about being a good teacher is trying to always be a constant learner and continue my education,” Jenkins said. “I am looking for creative and interesting experiences that help inspire me and try to share the new knowledge, inspiration and energy with my students.”

Jenkins earned his bachelor degree in elementary education with a science concentration from Wright State in 1997 and a master’s in science teaching in 1999.

He expects to go on at least one of the eight-to-10-hour night flights and possibly two. He plans to videoconference with his students during the flights and is already prepping them by having volunteers from the Air Force Research Laboratory talk to them about the electromagnetic spectrum and why infrared is important in astronomy.

The aircraft, a highly modified Boeing 747 outfitted with a telescope more than eight feet in diameter, will take off from the Dryden Aircraft Operations Facility in Palmdale, Calif. Besides the pilots and technical crew, the plane will carry two teams of educators as well as scientists, engineers and astronomers from NASA and universities around the world—about two dozen people in all.

SOFIA is a joint project of NASA and the German Aerospace Center. Twelve two-person teams were selected for the Airborne Astronomy Ambassadors program, representing educators from 10 states. Jenkins will have a computer and a workstation on the flights.

“My experience in astronomy and astrophysics is very minor compared to people who dedicate their entire lives doing this,” Jenkins said. “The flight for the educators is more to be inspiring and show us real-life science at the highest level so we can share that experience with our kids.”

Jenkins said he really caught fire with the passion for teaching science when he was at Wright State learning from professor William Slattery, who turned him on to inquiry-based education.

In addition to teaching at the middle school, Jenkins has also worked at the Dayton Regional STEM Center and Air Camp, a hands-on, educational aviation and aeronautics program.

Jenkins believes the NASA experience will give him a better understanding of processes involved in true scientific research.

“Hopefully I’ll be able to pass those skills on to the kids,” he said. “Another thing is the enthusiasm, which is priceless. Science is wonderful, but too many times we extinguish that fire before we get it ignited and we lose the kids’ interest. The one thing I want students in my class to walk away with is the fact that they learn for a purpose.”