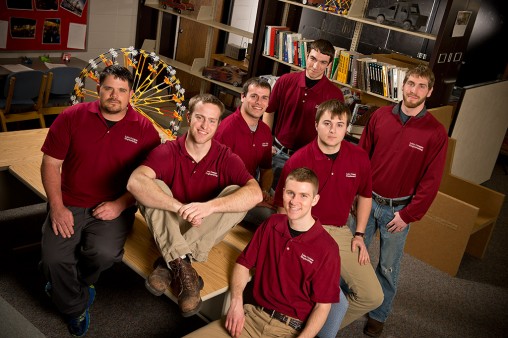 The first class of Wright State University–Lake Campus engineering students won’t have much time to relax after graduation. Each student from the rapidly growing program who wants full-time engineering work already has a job lined up and waiting. Some have already been working full time.

Three will go to work for Crown Equipment, which makes powered industrial forklift trucks. One has been offered a full-time position with Coldwater Machine Company. They build machines for manufacturing operations. Another is already working for New Bremen Machine and Tool. Setex, which makes parts for the front seats of automobiles, hired one. And the seventh wants to focus on engineering research and plans to pursue a master’s and likely a Ph.D. in engineering at the Dayton Campus.

This development is not surprising to those who are familiar with the robust advanced manufacturing engineering segment in Mercer and Auglaize counties and the rocket-like trajectory of this still-fledgling program.

Currently, there are 128 students in the program including seven seniors and there is a relentless demand for more.

Bonnie Mathies, dean of the Lake Campus, attributes the rapid growth of the program to the high demand for skilled engineers in northwest Ohio and the program’s unique blend of theoretical and applied learning. The program focuses on four goals:

“Any student who wants a paid co-op or internship can get one. The demand for our students from local industry seems insatiable,” said Mathies. It’s not just the seniors. Nearly all of the junior class has a co-op or internship and sophomores are getting them too.

“The interest is phenomenal. Local manufacturers all wish they could fast-forward and get these students now,” said Jared Ebbing, Mercer County economic development director.

“There’s about 40 major businesses up here,” said Dennis Hance, lecturer and assistant director of Lake Campus engineering programs. “There’s billions of dollars in annual sales revenue in high-tech products each year, and they need highly trained people with really good work habits, and that’s what we are producing.”

The students and their persistent work ethic is also driving the success of the engineering program.

“They’re farming students; they’re small-town students. Some of our students have worked all through high school and at home,” said Hance. “Now they’re in college and they’ve added some technical abilities and they’ve sustained that work ethic. You tie the two together and they are good employees.”

Mathies also adds that “The combination of our program goals, 100 percent co-op and internship placement, and students’ frequent use of local equipment to gain hands-on experience add up to success for both employers and students in the region.”

John Will, who’s on his way to joining Coldwater Machine as a mechanical engineer, said the experiential learning he and his classmates gained by working with on-site equipment was the best preparation he could have asked for.

Last summer, students also participated in the program’s first international trip, which allowed them to work with German students to build microprocessors for Battle Bots. Students were challenged to continue the research they started overseas by applying their research to domestic applications back in Ohio.

Many of the students’ senior design projects are already doing just that.

“My team’s senior design project consists of developing a police robot for the Grand Lake Regional SWAT team,” said John Neiferd. “We are developing a product that will actually be used to benefit the entire community by helping to keep people safe. That’s a good feeling.”

“That was a positive experience because the students gained so much by sharing what they’ve been learning in their engineering classes,” said Mathies. “We knew that they were the model students for our new program, but they also learned how important it is to be role models for future engineers too.”