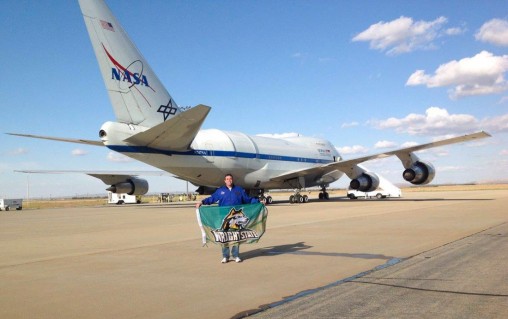 One day he’s in the classroom, teaching science to middle school students. The next he’s strapped in a harness hurtling toward the heavens on NASA’s high-flying starship.

Wright State University alumnus Tom Jenkins, who teaches science at Indian Valley Middle School in Enon, Ohio, was a crew member on several flights of the Stratospheric Observatory for Infrared Astronomy, or SOFIA, in May. The flights were part of NASA’s flying-classroom-for-teachers program.

“As we walked down the runway toward the plane, I was flooded with emotion,” Jenkins said. “I knew that what I was about to experience would be one of the highlights of my life. I was going to witness science at its highest level.”

The aircraft, a highly modified Boeing 747 outfitted with a telescope 10 feet in diameter, took off from the Dryden Aircraft Operations Facility in Palmdale, Calif. Besides the pilots and technical crew, the plane carried two teams of educators as well as scientists, engineers and astronomers from NASA and universities around the world—29 people in all.

Inside, Jenkins was sitting backwards at a research station, strapped snugly into his seat.

“The pilot punched it, and it was quite a rush to feel the immense power of the four-engine 747,” he said. “In the blink of an eye we were at altitude.”

During the 10-hour flights, the airborne observatory flew over the western half of North America at altitudes of up to 43,000 feet. It was equipped with a 17,000-pound infrared telescope that peers into the heart of the universe from an open garage-door-sized panel on the aircraft.

Conventional telescopes allow scientists to use visible light to see the night sky, but they can’t see everything because of cloud cover or distances. Infrared telescopes enable scientists to see through things and see greater distances. And by flying at heights of 43,000 feet, the telescope is above the water vapor in the atmosphere and can see even farther.

SOFIA is a joint project of NASA and the German Aerospace Center. Twelve two-person teams were selected for the Airborne Astronomy Ambassadors program, representing educators from 10 states.

Jenkins used headsets to communicate with other crew members. Those on board included Brian Williams from NASA Goddard and Ryan Lau from Cornell University, the primary research investigators. Much-discussed topics included supernovae—or blinding stellar explosions—and events occurring around the galactic center, the rotational heart of the Milky Way.

“I was excited to be able to geek out with people that are at the pinnacle of their professions,” Jenkins said. “To be able to work with NASA-level astronomers and astrophysicists was incredible.”

Jenkins earned his bachelor degree in elementary education with a science concentration from Wright State in 1997 and a master’s in science teaching in 1999.

The flight enabled him to gather resources and come up with examples to create new curriculum and aid in the teaching of his students.

During the flight, he also talked to the engineers who created and flew the aircraft and met the German engineer who built the telescope. The engineer explained how it was mounted, remained balanced during the flights and captured one-of-a kind images. Jenkins said the interactions gave him ideas for engineering design challenges for his classes.

In addition to teaching at the middle school, Jenkins has worked at the Dayton Regional STEM Center and Air Camp, a hands-on, educational aviation and aeronautics program.