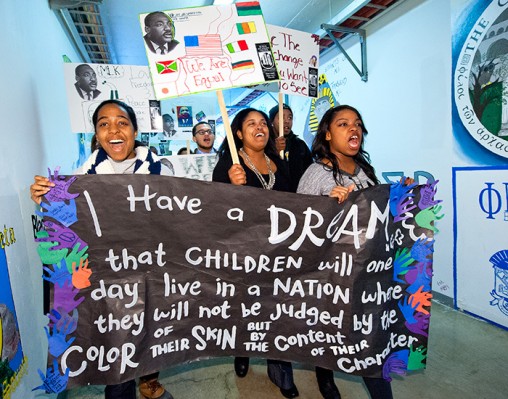 King, a clergyman, activist and prominent leader of the African-American civil rights movement, received the Nobel Peace Prize for his efforts to end racial discrimination. He was assassinated in 1968. In 1986, Martin Luther King Jr. Day was established as a federal holiday.

On Monday, Jan. 19, an RTA bus will be available for students, faculty and staff interested in participating in Dayton’s Citywide MLK March. The bus will leave from the Student Union at 9:15 a.m. for Dayton. Wright State participants will depart from the front of the Dayton Convention Center at noon for the return trip to campus.

On Tuesday, Jan. 20, participants in a campus march and rally will meet in the Millet Hall Atrium at noon and proceed to four different campus locations. The march will culminate in a rally at the Student Union ending at 1 p.m.

On Wednesday, Jan. 21, the Bolinga Center will show the documentary film “Letter from Birmingham Jail” from noon to 2 p.m. in the Millett Hall Atrium.

King wrote the letter on April 16, 1963, defending nonviolent resistance to racism. It became an important text for the American civil rights movement. A panel discussion will be held after the screening.