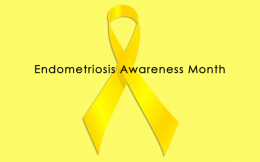 Endometriosis affects 6.5 million women and girls in the United States and more than 89 million women worldwide. The hormonal and immune system disease is linked to numerous cancers, including ovarian cancer, autoimmune diseases and allergic diseases, according to the Endometriosis Association.

March is Endometriosis Awareness Month. During this national health observances month, Wright State Physicians Obstetrics & Gynecology is encouraging women to ask their physicians about this disease, which affects girls as young as 8 years old as well as women up to 80.

“In endometriosis, tissue found outside the uterus develops into growths that cause pain, infertility and other problems,” said Jerome Yaklic, M.D., medical director of Wright State Physicians Obstetrics & Gynecology. “Women may experience painful periods, pain during or after sex, excessive bleeding during or between periods or infertility.”

Yaklic, who also is chair of the Wright State University Boonshoft School of Medicine Department of Obstetrics and Gynecology, said women should contact their physician if they are experiencing chronic or severe pelvic pain.

“While there is no cure, we can treat endometriosis through medication, hormone therapy or surgery,” Yaklic said.