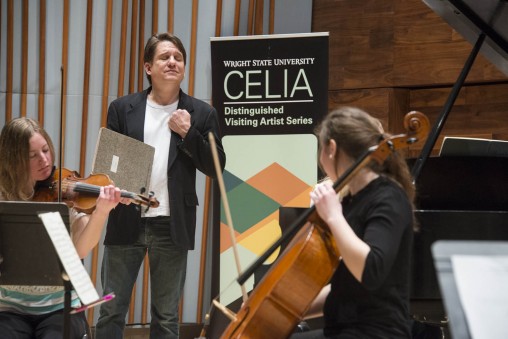 Conductor Keith Lockhart listening closely to the performance of a piano trio during a master class in Schuster Hall. Lockhart coached Wright State music students as the university’s Distinguished Visiting Artist and will conduct Britten’s “War Requiem” March 13 and 14.

Lockhart, the conductor of the Boston Pops and the BBC Concert Orchestra, led master classes with School of Music percussion, string and piano and voice students this week. He provided detailed feedback and coaching on the students’ performances.

“It was great feedback, and I’m really excited to work on the stuff he told me to work on,” she said. “It was definitely a great experience.”

Senior Neldys Crespo was one of four students who sang for Lockhart and vocalists Ellie Dehn, Matthew DiBattista and Justin Hopkins, all of whom will perform in the “War Requiem” concerts March 13 and 14.

Crespo, who is majoring in both vocal performance major and Spanish education, described singing for them as an “out of body experience.”

“It was just an amazing experience to be able to work with people who are currently in the field,” she said.

The detailed feedback and instruction Crespo received from Lockhart and the soloists gave new meaning to a song she has been singing for months, she said.

Procopio said she transferred to Wright State to study with Jerry Noble, director of percussion, and professionals like Lockhart.

“It’s really nice knowing we can interact with people who are so famous in the music world and we’re having a lesson with them,” Procopio said. 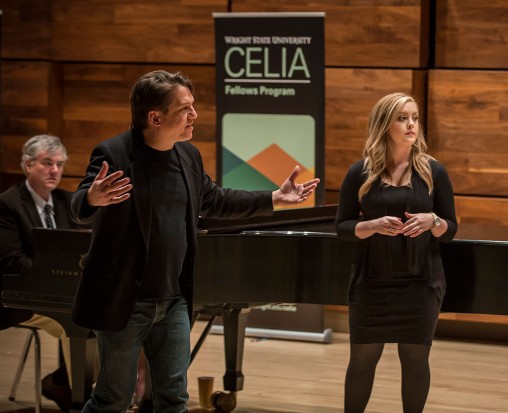 Lockhart will participate in a program of dramatic readings from World War I with his brother Paul Lockhart, professor of history and the Brage Golding Distinguished Professor of Research, on Thursday, March 12, from 1 to 3 p.m.

He will also answer questions during an open forum Friday, March 13, from 10 to 11 a.m.

Both events take place in Schuster Hall in the Creative Arts Center.

Paul Lockhart will give a pre-concert lecture on how the “War Requiem” connects with World War I each night at 7 p.m. Tickets prices range from $11 to $61 and $8 and $14 for students.

Lockhart’s residency and the “War Requiem” concerts are part of “A Long, Long Way: Echoes of the Great War,” organized by Wright State’s Ohio Center of Excellence in Collaborative Education, Leadership and Innovation in the Arts (CELIA).

The final concert in the “Long, Long Way” series this academic year is the fourth annual “Poetry and Music Concert” on Friday, April 24. The concert will feature classical music inspired by World War I.

Justin Hopkins and Ellie Dehn participated in the voice master class and will perform in the “War Requiem” concerts.

Jeremy Aldridge enjoys a light moment after performing during the voice master class.

Keith Lockhart listens closely to the performance of a piano trio.