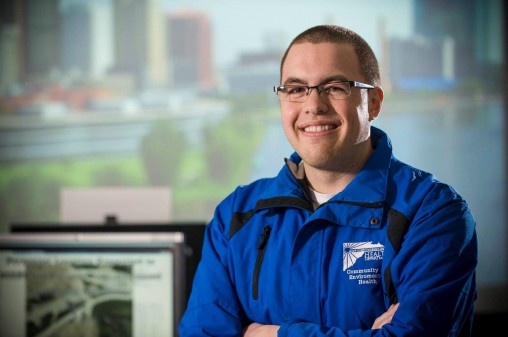 The Toledo-Lucas County Health Department needed someone to coordinate disaster response. It needed someone to manage emergency plans and work with community partners in a region that includes nearly half a million people, Lake Erie and the Davis-Besse nuclear power plant.

So naturally it picked a Wright State University student. Specifically, Dan Baker, who is working on his master’s degree in public health after picking up two bachelor degrees.

“The toughest part is trying to juggle so many things at the same time,” Baker said of his job. “You wear a lot of different hats.”

Baker grew up in New Carlisle, Ohio. His father is an electrical engineer who worked on missiles and rockets when he was in the Air Force and now is civilian director of STEM outreach for the entire Air Force. His mother compiles traffic crash statistics for the National Transportation Safety Administration. Both are Wright State grads.

A graduate of Tecumseh High School, Baker arrived at Wright State in 2008 and began his undergraduate work as a biology major. He later became interested in environmental science, excelling in classes on air quality, epidemiology and public health. He graduated in 2012 with bachelor’s degrees in biology and earth and environmental sciences from the College of Science and Mathematics.

He took a job at Wright-Patterson Air Force Base, where he worked at the National Air and Space Intelligence Center.

“I got to learn a lot about what the nation does for national security and preparedness,” he said. 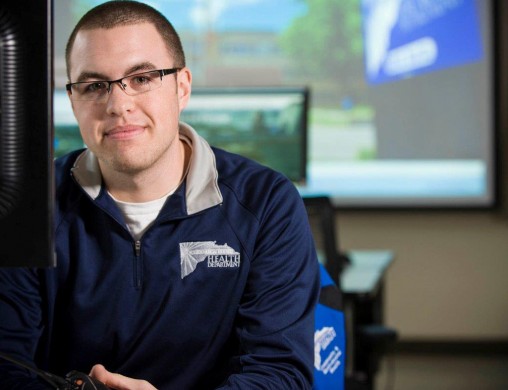 Dan Baker graduated from Wright State in 2012 with bachelor’s degrees in biology and earth and environmental sciences and is now a student in the Master of Public Health program in the Boonshoft School of Medicine.

Baker later worked for civil engineering at the base as an environmental technician, sampling water and taking air quality measurements. He returned to Wright State in 2013 to begin working on his master’s in public health from the Boonshoft School of Medicine.

“I just need to follow what I’m good at, which is public health,” he said. “I started out in bio, so I actually know all the science behind all the public health concepts.”

Public health is a rapidly expanding field that encompasses emergency preparedness, food safety, building codes, smoking prevention and other areas that affect the well-being of people.

“A lot of people are beginning to talk more about the importance of public health, especially with Ebola,” Baker said.

Baker interned with Public Health – Dayton & Montgomery County, an agency that protects the air, food, drinking water and many everyday aspects of the community. During his internship, he helped with an exercise on radiological safety and terrorism for the eight counties of west central Ohio.

“It really gave me a full experience in exactly how emergency preparedness works, how to make connections in your community and do outreach,” he said.

He plans to remain in his job as disaster response coordinator for the Toledo-Lucas County Health Department after graduating from Wright State in May.

He is also coordinator for the Lucas County Medical Reserve Corps, a volunteer organization of medical professionals that assists during disasters.

Baker, recipient of an Alumni Legacy Scholarship, is currently a member of the Wright State Alumni Association Board of Directors. He credits his success to the university’s high-quality faculty and the personal attention they give students.