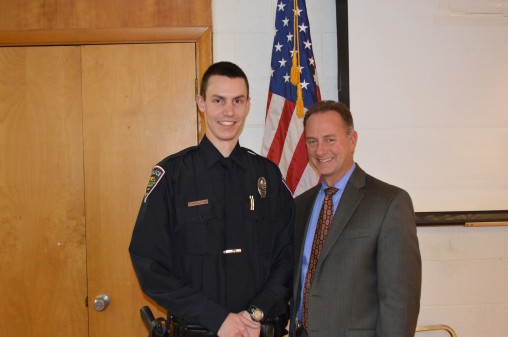 A Wright State Lake Campus graduate and three-year veteran of the university Police Department has been recognized for his professionalism, problem solving, integrity and inclusivity while serving as the Lake Campus police officer.

The Knights of Columbus Fairborn chapter recognized Tyler G. Pottkotter at their annual Blue Coat Awards event in March. The chapter started their Blue Coat Awards in 1973 to honor police officers and firefighters for their service to their communities.

Finnie also described Pottkotter as a self-motivated and resourceful officer and a consummate professional.

After earning his bachelor’s degree from the Lake Campus in 2012, Pottkotter began work at the Lake Campus as a part-time officer in March 2012. By September 2012 he had become such an indispensable part of the community that he was promoted to full-time work.

Lake Campus leadership considers his dedication and willingness to serve and protect the community to be extraordinary and exemplary.

“Tyler has achieved considerable respect for his position. By subtly asserting himself in student situations, he made clear demonstration to faculty and staff as to why he is so needed at the Lake Campus. In addition, he has aided with numerous Lake Campus-specific conduct cases during his time so far,” said Bonnie Mathies, dean of the Lake Campus.

Pottkotter steadfastly believes in protecting not just the opportunity for students to get a degree from an institution of higher education, but for students to be able to do it in a safe place.

“I love my job and consider it an honor to protect and serve the Lake Campus community,” said Pottkotter.