A moment in the spotlight 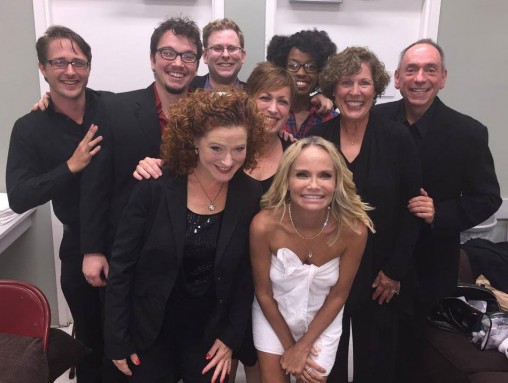 Fans of Kristin Chenoweth were treated to some Wright State star power during the singer and actress’s recent appearance at Fraze Pavilion in Kettering.

Eight local performers — including five with Wright State connections — had the opportunity to sing backup vocals for the Emmy and Tony Award-winning artist.

“We had a blast!” said senior musical theatre major Jasmine Easler, who readily admitted to screaming when she first received the invitation to perform. “As successful and amazing as Kristin is, she made us all feel we were on the same level as her. It was really comforting and made it really easy to let go of my nerves. I could focus on having fun and enjoying the moment.”

Kevin Moore, president and artistic director of the Human Race Theatre Company, reached out to Easler and the other artists after being contacted by Mary-Mitchell Campbell, Chenoweth’s music director. Campbell was looking for local talent to accompany Chenoweth on three songs during her debut performance at the Fraze.

With just a few days to learn their respective parts, the singers received their music via an email from Campbell, who had already laid down the harmony tracks so they could hear how the music sounded. The performers then attended a rehearsal and soundcheck just a few hours before the 8 p.m. show on Aug. 29.

That rehearsal turned into a reunion for Chenoweth and Wright State music director Scot Woolley. The two first met in New York City in 1993, when Woolley cast Chenoweth in the Nederlander Organization’s production of “Little Me.” The musical, which would be performed at the Nederlander’s theater in Michigan, was only Chenoweth’s second professional show.

“We cast her because she gave a wonderful audition and there was that wonderful, remarkable voice already,” Woolley recalled. “I remember when we were working that she really stood out, very quietly, but she stood out. There was something so special about her.”

Those unique qualities would propel Chenoweth to fame on both stage and screen. Probably best known for her role as Glinda in the original Broadway production of “Wicked,” Chenoweth has also received an Emmy Award for Best Supporting Actress in the ABC comedy series “Pushing Daisies” and a Tony Award for her performance in “You’re a Good Man, Charlie Brown.” Chenoweth was most recently seen in the Disney Channel’s live-action original movie “Descendants,” where she played the classic Sleeping Beauty villain Maleficent.

While her star may have risen over the years, Chenoweth remains the same humble, down-to-earth person that Woolley met more than two decades ago.

“She was gracious and available and so not about being a celebrity or famous or having won a Tony,” said Woolley. “She was just about being a nice person, a good person.”

“Kristin was absolutely amazing. She was so much fun and incredibly genuine. When you go in to meet someone with that level of success, you don’t really know what to expect, but she was incredibly sweet. She took the time to talk to all of us, and it was actually Kristin who wanted to take a picture with us,” Jones said. “The biggest thing I took away from Kristin was how open and honest she was with everything she did. She owns who she is, and puts it into everything she does.”

Jones, Easler and 2014 graduate Zack Steele sang backup vocals for Chenoweth on the song “9 to 5.” They were joined by the other artists later in the show for renditions of “Upon this Rock” and “I Was Here.”

For Steele, witnessing Chenoweth’s love of performing was an inspiration.

“Being on stage with her was as easy as it is with some of my dearest friends,” Steele said. “She’s right there with you making eye contact with you, playing off of you. I think she just enjoys sharing the gift of music with everybody, which is so delightful to be around.”

While singing with Chenoweth was a thrill they will never forget, the evening also provided a rare opportunity for Wright State students, alumni and faculty to perform together.

“That’s one of the special perks of doing what I do as a combination of a teacher, a director and then a performing artist on my own. It’s such a beautiful way to come full circle to have a shared experience doing what you love,” said Marya Spring Cordes, assistant professor of acting and musical theatre. “Those are special moments in time. You don’t get them all that often and you just have to love them and soak them up when they do occur.”