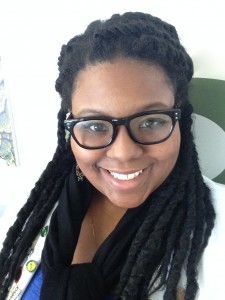 Christen Johnson is a third-year medical student at the Boonshoft School of Medicine and president-elect of the Student National Medical Association.

When she was 3 years old, Christen Johnson’s mother took her to the doctor at an urgent care facility for an ear infection. Because Johnson was the last patient of the night, the physician took extra time with her. She let Johnson listen to her heart and explained all of the medical equipment in the room.

After the visit, Johnson fastened herself into her car seat and said she wanted to be just like the “lady doctor” when she grew up.

“I don’t remember much of the interaction, but I do remember that she was an African-American woman,” said Johnson, who is a third-year medical student at the Wright State University Boonshoft School of Medicine. “I remember looking at her and seeing someone who looked like me. It was the first time that I saw someone that I could identify with in the medical field.”

As president-elect of the Student National Medical Association (SNMA), the oldest and largest medical student organization dedicated to serving the needs of underrepresented minority students who wish to pursue careers in the field of medicine, Johnson has spent much of the year promoting mental health awareness and leadership development. She also serves as chair of the national SNMA elections committee.

Johnson first became involved in SNMA as an undergraduate student at Wright State, where she earned a Bachelor of Arts in Biological Sciences with a certificate in African American and Women’s Gender Studies.

Johnson was a member of the Minority Association of Premedical Students (MAPS), which represents the undergraduate and post-baccalaureate students of SNMA. She became involved in a mentoring program with the SNMA Wright State chapter. The MAPS group attended SNMA chapter meetings and events.

“From there, I met SNMA members who continue to support me to this day,” said Johnson, who also met other SNMA members from all over the nation at national conferences. “We’ve hosted each other for medical school interviews, emailed professional opportunities and supported each other through tough times.”

Once she became a medical student at the Boonshoft School of Medicine, she served as a Region V assistant regional director and president of the Wright State chapter, in addition to other positions within the local chapter and regional and national organizations.

Johnson describes SNMA as an organization that enabled her to grow and develop professionally and personally.

“Words cannot describe the amount of love and support this organization has shown me through mentors, friends and opportunities. SNMA is more than just a student organization,” said Johnson who also is working on her Master of Public Health degree in addition to her M.D. degree. “We are a family and a network that stays with students throughout their lives professionally and through life-long relationships. This makes being part of SNMA not only unique but truly a fulfilling experience.”

Johnson will serve as president-elect of SNMA until March when she becomes president at the SNMA Annual Medical Education Conference in Austin, Texas.

In the meantime, she is busy as a medical student at Wright State, where she is active in the Family Medicine Interest Group, of which she is the past copresident. She also is a member of Phi Rho Sigma, a national social and community service organization represented by Alpha Upsilon Chapter at the Boonshoft School of Medicine.

She is a 2015 recipient of a scholarship from the National Health Service Corps (NHSC) Scholarship Program, which awards scholarships to students pursuing primary health care professions in return for a commitment to provide health care to communities in need. After a residency in family medicine, she plans to serve at an NHSC-approved site in a high-need health professional shortage area for a minimum of two years.

Her goal is to become an academic family physician with a special interest in adolescent health. She wants to dedicate her career to the elimination of health disparities.

“Medicine is a perfect blend of my passion for science and service to the community,” she said. “I have a love for serving underserved populations and a passion for working with patients to deliver culturally competent care.”