Carol Loranger believes that books can transform the world.

“I’m a true believer. I really do believe that books can change people’s lives,” said Loranger, chair and associate professor of English language and literatures.

“The idea that words can change things—that’s certainly a university value and it’s absolutely a College of Liberal Arts value,” she said. “Nearly every one of our disciplines focuses on understanding how humans shape their world with language.”

It’s a big reason why Loranger leads Wright State University’s involvement in the Dayton Literary Peace Prize, which commemorates the Dayton Peace Accords by annually recognizing literature that promotes the cause of peace. The prize honors adult fiction and nonfiction books that lead readers to a better understanding of other cultures, peoples, religions, and political points of view.

The prize was founded by Sharon Rab, who graduated from Wright State with a Master of Education degree in 1975. Rab also received an honorary Doctorate of Humane Letters from the university during fall 2015 commencement. 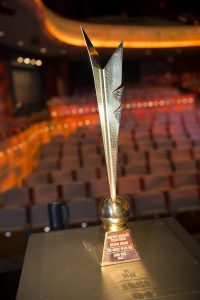 Negotiated at Wright-Patterson Air Force Base, the 1995 Dayton Peace Accords ended years of ethnic warfare in Serbia, Bosnia and Herzegovina, and Croatia.

Rab, who taught language arts at Kettering Fairmont High School and composition at Miami University, said she saw lives that were changed by literature. “Words can heal,” she said during a 2013 TEDxDayton talk.

Wright State has long had a strong connection with the Dayton Literary Peace Prize, which was first awarded in 2006. Wright State faculty and administrators serve on peace prize committees, help decide prizewinners, support the prize, and welcome authors to campus.

“It’s consonant with what we try to do at universities: to ask tough questions that will ultimately lead to promoting understanding between and among people,” Loranger said. “So literature about peace or social justice issues has an education function.”

Chuck Taylor, dean emeritus of the College of Liberal Arts, played an instrumental role in getting both the college and Wright State involved in the prize.

Both the literary peace prize and the Dayton Peace Accords bring a lot of positive attention to Dayton, Loranger said. “Dayton is a city that takes its place on the national stage seriously, and we’re willing to put some skin in the game. We support these authors,” she said.

Taylor and Henry Limouze, who was chair of the Department of English Language and Literatures, sat on the literary peace prize’s planning committee in its nascent stage. Today, Loranger serves on the steering committee and the panel that oversees the Richard C. Holbrooke Distinguished Achievement Award, the peace prize’s lifetime achievement award.

Many Wright State and College of Liberal Arts faculty support the prize by attending its annual gala, during which the winners are honored. Ticket sales from the gala help fund the prizes. 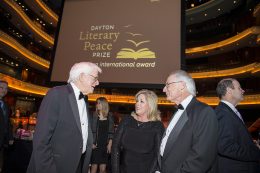 The gala brings together those in the Dayton community who share a passion for great literature about peace, Taylor said.

“Every time I attend the event, I’m reminded ‘Books are important!’ ‘Literature is important!’” he said. “It is a collection of people from diverse parts of the Dayton community who have come together because of their shared love of literature. It is not a gathering for academics. I sat at a table at the latest event with an M.D., a journalist, and a fundraiser for a religious organization.”

Every year, Wright State faculty serve as first readers for the prize, reading many nominated books and recommending which works the judges should consider.

English faculty members Lynette Jones and Drew Strombeck serve on a consortium that coordinates events held at local universities surrounding the annual awarding of the prizes.

The English department regularly coordinates with other Wright State departments—including African and African American Studies; History; Social Work; and Women, Gender, and Sexuality Studies—to organize events related to the literary prize and bring authors to campus for public readings and to meet with students.

Sponsored by Wright State’s Ohio Center of Excellence in Collaborative Education, Leadership, and Innovation in the Arts (CELIA), Accords included a photography exhibition, a concert, and a literary conference titled Ten Years of the Dayton Literary Peace Prize.

Strombeck organized the events as a CELIA fellow in spring 2015. He focused his fellowship on the literary peace prize because it supports and strengthens Dayton’s reading public and responds to a bright moment in international affairs that is also an important moment in Dayton’s history.

“Not only is the prize a crucial part of Dayton’s literary cultures, it also poses important questions about what literature might actually do to promote peace,” Strombeck said. 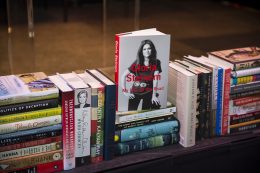 Along with the Dayton rock band Guided By Voices, the Dayton Peace Accords were one of the two things Strombeck knew about Dayton before he moved here to teach at Wright State.

“The idea that people who wished death on each other could be brought together to work things out seemed so powerful to me as a young person in the 1990s,” he said.

“Visions of Conflict,” the photo exhibition held during Accords: Peace, War, and the Arts, featured works by a photographer from Sarajevo, two war photojournalists, and a two-time Pulitzer Prize winner. The exhibition was curated by Benjamin Montague, associate professor of art.

Wright State faculty also use works by winners of the Dayton Literary Peace Prize in the classroom.

Last academic year, Strombeck taught a course on Literature and Conflict, featuring works from some of the winners, while students in Loranger’s peace literature course wrote reading group guides for some of the winning books.

The Department of English Language and Liter-atures is creating readers’ guides for the 2015 prizewinners’ works.

Loranger also works with Wright State Libraries to create a searchable online accumulative bibliography of peace prizewinners and runners-up. She wrote the introduction, a brief history of the peace prize, and instructions on how to use the website and compiles the winning books for each year. The site can be viewed at corescholar.libraries.wright.edu/dlpp

“Here’s this reading list of good books selected by your contemporaries in Dayton,” she said, “and they can have a positive impact on your world.”