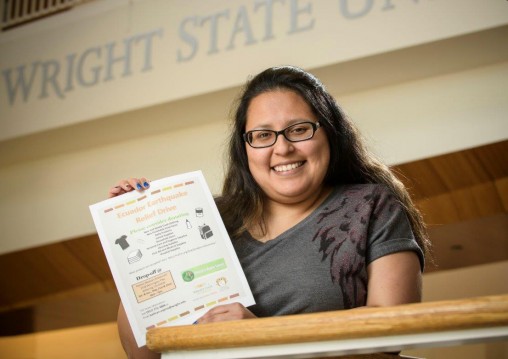 Jomara Murillo-Farmakis, an Ecuadorean student who graduated from Wright State in April, is helping organize a relief effort for earthquake-stricken Ecuador. (Photo by Erin Pence)

Devastated by an earthquake that left hundreds dead and thousands homeless, Ecuador will soon get help from Wright State University and the Dayton community thanks to several Ecuadorean students.

The students are organizing a relief effort that will send food, clothing and other donated essentials to the ravaged South American nation. Assisting in the effort is Wright State’s Office of Latino Affairs.

“The need is still very great,” said Jomara Murillo-Farmakis, an Ecuadorean student who just graduated from Wright State with her Master of Business Administration. “People have lost everything. If you see the pictures, it’s just devastating.”

The 7.8-magnitude earthquake on April 16 in Ecuador’s coastal region claimed 660 lives and left more than 7,000 injured. About 22,000 people are still living in temporary shelters.

Organizing the relief effort are Murillo-Farmakis; her brother Alejandro Murillo, a student at Sinclair Community College; and Isabel Herrera, a Wright State business student from Guayaquill, the Ecuadorean region hardest hit by the earthquake.

“It’s my country,” said Murillo-Farmakis. “It’s in our blood to help. I felt frustrated that I was here and couldn’t jump into action there.”

Donations should be brought to the parking lot of Pepito’s Mexican Restaurant (3618 Wilmington Pike in Kettering), which is owned by Ecuadorean George Andrade. The donations will be accepted from 9 a.m. to 7 p.m. on Saturday, May 21, and Sunday, May 22.

The items will be loaded on a truck owned by former Wright State soccer star Greg Harlow and driven to the Cincinnati office of Matthew 25: Ministries, an international humanitarian aid and disaster relief organization that will transport the items to Ecuador.

Ecuador, a representative democratic republic in northwestern South America, has a developing economy heavily dependent upon petroleum and agricultural products.

Murillo-Farmakis was born and raised in the capital of Quito. She came to the United States in 2010. Her husband is a student at Wright State’s Boonshoft School of Medicine.

Murillo-Farmakis said that while the Wright State relief effort may be a small gesture, it is a way to let Ecuadoreans know they have not been forgotten.

“We are a generous people, and now it’s time to be generous with our own people,” she said. “We are hoping the generous people of Wright State and the community will come out and help us.”