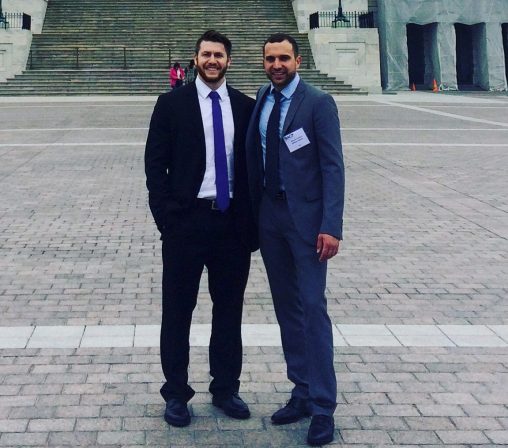 For Wright State University Boonshoft School of Medicine student Nick Christian, the opioid epidemic has hit home. One of his close friends from high school became addicted to opiates after injuring his back playing football. Christian’s friend overdosed, but he was revived with naloxone, a medication used to treat opioid overdoses.

“The opioid abuse epidemic is not just a phenomenon affecting lower-class, inner-city neighborhoods,” said Christian, who is from Covington, Ohio, north of Dayton. “This is affecting people of all backgrounds. Addiction has no boundaries.”

Shocked to see the impact of the opioid epidemic in rural Ohio, Christian jumped at the opportunity to bring visibility to the issue as part of the American College of Physicians (ACP) Leadership Day 2016 in May. Leadership Day is the ACP’s annual two-day advocacy event in Washington, D.C. Members of the organization converge on the U.S. Capitol and meet with legislators and staff. The ACP is a national organization of internists, specialists who apply scientific knowledge and clinical expertise to the diagnosis, treatment and health care of adults.

Christian is pursuing both his Doctor of Medicine and Master of Business Administration degrees (M.D./MBA) through the Boonshoft School of Medicine Physician Leadership Development Program (PLDP), a dual-degree program through which medical students can obtain a master’s degree in public health or business while pursuing their medical degree over five years. He expects to graduate in May 2017 and pursue a residency in internal medicine.

He was joined by another Boonshoft School of Medicine PLDP student, Jensen Kolaczko, of Lorain, Ohio, who also expects to graduate in May 2017. Kolaczko plans to pursue a residency in orthopedic surgery and a fellowship in sports medicine.

Congress was in recess when they were in Washington, D.C., so they met with legislative assistants from the offices of Sen. Sherrod Brown and Reps. Steve Stivers (15th District), Brad Wenstrup (2nd District), Steve Chabot (1st District) and Tim Ryan (13th District). The ACP addressed several key issues during Leadership Day on Capitol Hill, including the increase in opioid abuse and graduate medical education funding.

“Everyone was in agreement that this is a serious problem that needs to be addressed in Ohio,” he said. “Many of the offices have been big advocates for laws pertaining to this issue.” 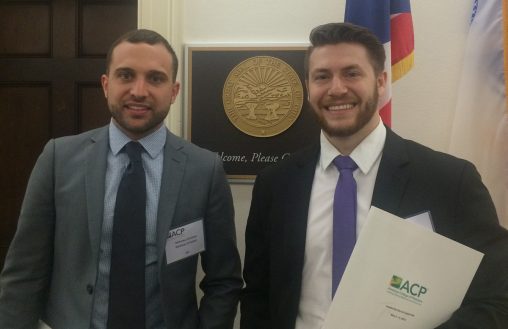 According to the Association of American Medical Colleges, there will be a shortage of as many as 35,600 primary care physicians by 2025. Non-primary care specialties are projected to have a shortage of as many as 60,300 physicians. The association recommends lifting the cap on federally funded residency training positions to train at least 3,000 more doctors a year over the next five years.

“With more funding from Congress, the number of GME residency spots can be increased,” Kolaczko said. “If Congress funded 3,000 more GME residency spots every year over the next five years, that would help train an additional 15,000 doctors, which would allow people to have access to health care more readily, especially with the baby boomer generation aging.”

When they are not tackling national health care issues, Christian and Kolaczko remain busy as medical students at the Boonshoft School of Medicine.

Christian is involved in STEPS (Students Teaching Educational Plans for Success) Health Initiative, a student-led organization that brings together students of medicine, nursing, pharmacy, psychology, social work and health communication to provide weekly preventive health counseling to women and men at homeless shelters in Dayton. He also is involved in Dayton IHI Open School, a chapter of the Institute for Healthcare Improvement. In addition, Christian finds time to play the bass and sing harmonies with Clark Manson, a country artist from his hometown of Covington.

“The guys in the band laugh at me when I’m cranking through lectures or doing questions on our bus when we’re on the road,” Christian said. “But they know how committed I am to medicine and have been supportive of me keeping up with both.”

At medical school, Kolaczko is involved in the Orthopaedic Interest Group and the Pre-Med Mentorship Program. He participated in the New Orleans Medical Mission Trip, helping rebuild homes destroyed by Hurricane Katrina. He also finds time for CrossFit, an extreme fitness regimen, and Olympic weight lifting. Kolaczko spends his spare time as a strength and conditioning fitness guru. If he is not at the hospital or studying, he is at the gym unwinding.