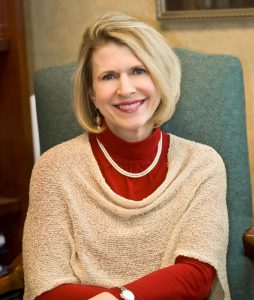 Rosalie Mainous, dean of the Wright State University-Miami Valley College of Nursing and Health, is about to step into the national nursing hall of fame.

Mainous has been selected as a Fellow in the American Academy of Nursing, one of the highest honors in the profession. She will be inducted during a ceremony at the academy’s national conference in Washington, D.C., on Oct. 20-22.

“It means a lot to be recognized,” said Mainous. “It’s public recognition that you’ve made a national impact.”

As the only nurse appointed to the American Academy of Pediatrics’ Committee on Fetus and Newborn, Mainous helped develop clinical guidelines for the care of newborns that have been adopted by nurseries around the country.

Mainous also helped revise national perinatal standards and contributed a manuscript on the transformation and future of nursing education for an Institute of Medicine report, The Future of Nursing, the most read in the institute’s history.

In her leadership roles with the National Association of Neonatal Nurses, Mainous helped established the Neonatal Research Summit, a premier mentoring program that has touched more than 150 neonatal investigators.

The fellowship recognizes Mainous as among a select group of national nursing leaders.

“I am delighted to welcome this superb cohort of talented clinicians, researchers, policy leaders, educators and executives as they join the ranks of the nation’s leading nursing and health care thought leaders,” said academy President Bobbie Berkowitz. “We look forward to celebrating their accomplishments at our conference and then working with them to advance the academy’s mission of transforming health policy and practice by applying our collective nursing knowledge.”

Some of the academy Fellows previously inducted inspired Mainous when she was a student.

“I read their books when I was coming through nursing school. I admired them,” she said. “They developed the theory that guides what we’re doing today.”

Mainous said the honor brings attention to Wright State and speaks to the university’s leadership. And she said it will help her groom future leaders in the College of Nursing and Health.

Mainous said Wright State has given her the freedom to exercise her creativity. She has been able to establish an interprofessional dedicated education unit and started a program in which a local hospital hires Wright State nursing students a semester before they graduate to shorten their transition to practice.

“The university has allowed me to be creative, and out of that creativity we have some great community partnerships and projects and initiatives,” she said.

Mainous, who is trained as a neonatal nurse practitioner, joined Wright State as dean of the nursing college in 2011. She was inducted as a Fellow of the American Association of Nurse Practitioners in 2014 for her clinical work.

Mainous also worked at University of Louisville Hospital as an RN in the neonatal intensive care unit and at Kosair Children’s Hospital as a neonatal nurse practitioner.

She was appointed a Robert Wood Johnson Foundation executive nurse fellow in 2009 and was in the Leadership America Class 2011.