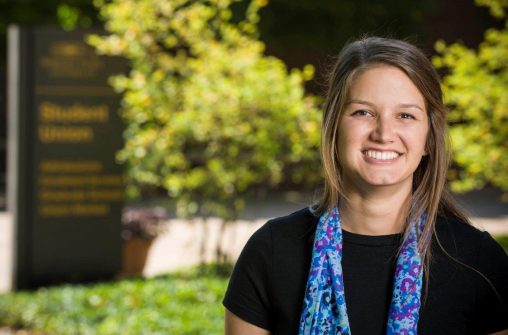 Lindsey Steller, a graduate student in the student affairs in higher education program, works in the Student Activities office, is president of a graduate student organization, and is adviser for the Black Student Union and for Raiderthon. (Photo by Will Jones)

Steller, who was traveling in Oregon at the time, scheduled a Skype interview with Wright State admissions officials and was soon admitted into the school’s master’s degree program in higher education.

Today, Steller — a self-described Type A personality and workaholic — is working on her master’s, works as a graduate assistant in the Office of Student Activities, is president of a graduate student organization, and is adviser for the Black Student Union and for Raiderthon, the annual dance marathon that raises money for Dayton Children’s Hospital.

“I want to work on a college campus, definitely with students,” she said.

Steller grew up in Fort Thomas, Kentucky, near Cincinnati. (“It’s very small-town America. You kind of know everyone.”) Before they retired, her father was a systems engineer at Procter & Gamble for 40 years and her mother worked as a nurse. (She is currently in culinary school.)

The entire family — Steller has two older brothers — were into water sports. They enjoyed boating, water skiing and scuba diving.

At Highlands High School, Steller played soccer, ran track and was on the school’s robotics team, which took part in national competitions.

She declared math as her major after enrolling at the University of Kentucky in 2010, but found physics too challenging and switched to Spanish.

“I really like the culture. It’s very family oriented,” she said of Spanish.

After graduating in 2014, Steller spent a year traveling to college campuses around the country for her sorority as a leadership consultant. Then came the Hanks commercial, and Wright State popped up on her radar.

Steller likes that inclusivity is such a big initiative at Wright State. She has come to realize that every student is “totally different.”

“You have to really get to know students, who they are, meet them where they are,” she said.