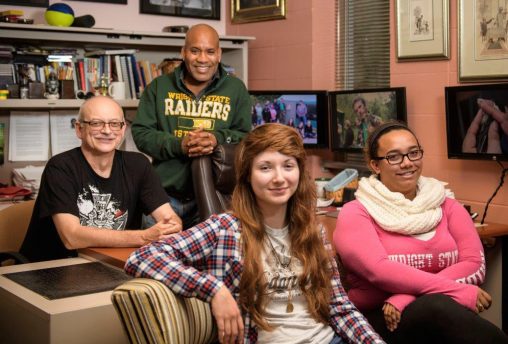 From left: Michal Kraszpulski, Martin Gooden, Rosa Tweed and Shana Huntsberger were among the Wright State faculty and students were took part in during a study abroad trip to Poland to research bird migration. (Photo by Will Jones)

An effort to unlock the mystery of birds’ migratory instincts was the focus of an experiment Wright State University animal behavior students took part in during a three-week, study abroad trip to Poland, the first of its kind by the College of Science and Mathematics’ Department of Psychology.

During the trip to Gdańsk and field stations in northern Poland near the Baltic Sea, the 10 students also explored birds’ abilities to escape predators and conducted research in the Gdańsk zoo on lions, giraffes, zebras, monkeys and tapirs.

“It was the perfect trip for me,” said Rosa Tweed, a biology and studio art major from West Milton. “I want to become a field biologist and work in conservation and hopefully endangered species. Prior to this, all of the study abroad programs just didn’t have anything on that topic.”

The trip was organized by Michal Kraszpulski, instructor in the departments of Psychology and Neuroscience, Cell Biology and Physiology.

Kraszpulski has taught animal behavior classes since 2014, instructing students in the psychological aspects of animal behavior and how it can shed light on human behavior.

For example, the class studies altruism as an evolutionary behavior not just seen in humans.

“Altruistic behavior is presented by several animal species,” Kraszpulski said. “In order to evolve it has to be an adaptive altruism — typically kin-directed or based on reciprocity. Wolves, for example, are altruistic. They share meat. They could eat meat by themselves, but they share it with other wolves. And when you think of ants, all of the workers are working to help the queen survive and have more offspring.”

He said students with backgrounds in animal behavior can find jobs in academia, government programs and conservation organizations such as the World Wildlife Fund.

Kraszpulski had been looking for a way for his students to conduct research on animals in nature. He had connections with researchers in Poland — which boasts some of the biggest names in animal behavior research — and reached a study abroad agreement with the University of Gdańsk, a port city on the Baltic coast.

Ten students in the class went on the Aug. 6-26 trip and were the subject of news reports by two Polish television stations. The students were assigned to make observations about various animal behavior experiments and then to produce research papers.

Shana Huntsberger, a pre-med student from Dayton, observed birds in a forested space enclosed by netting to see how two birds would interact in different experimental situations. Another experiment affixed beaded necklaces to birds to gauge their effectiveness in escaping predators by angle of flight.

Tweed joined a 40-year-long study that removed all points of reference except the sky for birds similar to robins and chickadees to try to learn how they orient themselves to migrate. She is an amateur birder who submits observations of birds she sees on Wright State’s campus to the Cornell Lab of Ornithology website that creates migration maps.

Tweed bankrolled the $3,250 trip by obtaining a $1,000 scholarship from the University Center for International Education’s study abroad program, $750 from the Department of Biology, $200 from the Polish Club of Dayton, $150 from a crowd funding website, $1,000 from her grandfather and the rest from a summer job picking up scrap metal and from gardening and running errands for the elderly.

Martin Gooden, lecturer and faculty in residence at the Bolinga Black Cultural Resources Center, accompanied the students on the trip and took extensive photographs. He said it was the first study abroad trip for instruction by the Department of Psychology.

“Much of the research we do in the college is lab research,” Gooden said. “I think we now have a much deeper respect and appreciation because many of the people we interacted with at the field stations were volunteers. These are truly citizen-scientists; all just incredibly passionate about studying birds. I found it thrilling and fascinating.”