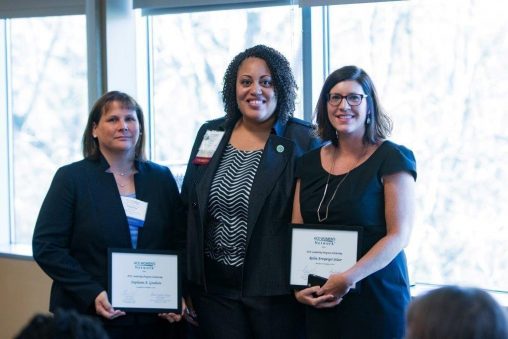 The award, which was presented to Goodwin on Nov. 4 in Columbus, Ohio, will enable her to attend the American Council of Education’s national leadership meeting in Washington, D.C., next March. The meeting brings together over 2,000 leaders in higher education each year for collaborative discussions and networking to address the most pressing issues facing higher education institutions today.

“We’ve made great strides on our campus in recent years when it comes to support for faculty development and leadership,” said Goodwin. “Attending the ACE annual meeting will afford me with more tools to support the continued success of these efforts in the coming year.”

Goodwin is a research assistant professor in the Department of Psychology, where she conducts research on social biases such as stereotyping, prejudice and discrimination.

Prior to her current role, Goodwin served at Wright State as program director for the LEADER Consortium, a multi-institutional National Science Foundation effort to promote faculty equity and success in STEM disciplines. She remains engaged in support of equity in STEM through her role as an executive adviser to other ADVANCE institutions, including the University of Cincinnati and Florida International University. She is frequently invited to share her leadership expertise with faculty and leaders at other institutions, most recently at the University of Michigan and the University of Maryland.

In June 2015, Goodwin was selected to participate in the Higher Education Resource Services (HERS) Summer Institute, a preeminent leadership development program that prepares women to become high-ranking decision-makers in higher education.

In 2008, Goodwin was elected Fellow of the Society of Experimental Social Psychology, an international professional organization that recognizes excellence in scientific contributions to social psychology.