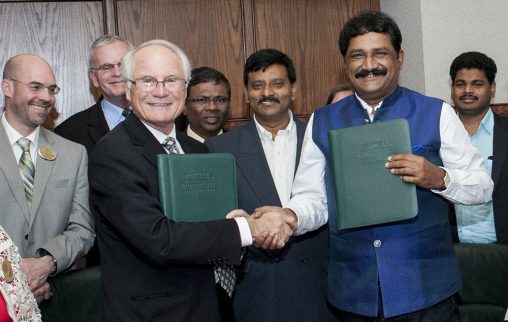 An agreement to further develop partnerships in student exchanges, research, industrial training and other areas between Wright State University and the Andhra Pradesh state in India has been reached.

The memorandum of understanding — which also includes partnerships in skills development and faculty collaborations in Andhra Pradesh — was signed Nov. 17 at Wright State by President David R. Hopkins and Ganta Srinivasa Rao, the minister for human resources development of Andhra Pradesh. Rao is currently in the U.S. working to secure additional investment to expand economic opportunities in Andhra Pradesh.

“I hope it will just keep building our friendship and make each other both very prosperous,” Hopkins said of the agreement.

Rao is a businessman with degrees in commerce and law. He was first elected as a member of the Parliament, later as a member of the State Assembly and currently serves as the Cabinet member for human resources development, which covers primary, secondary, higher and technical education. Previously, Rao served as Cabinet member for infrastructure and investment, ports and natural gas.

The economy of Andhra Pradesh is mainly based on agriculture and software industries. It is home to the Tirumala Venkateswara Temple, an ornate hilltop shrine to Hindu’s Vishnu that is visited by tens of millions of pilgrims annually.