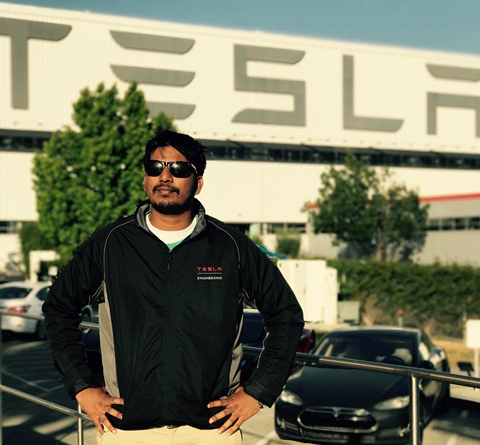 The letter to Wright State University graduate engineering student Shashank Reddy Goli from manager Bob Rush confirming Goli’s internship at Tesla, Inc. said: “Rest up and get ready for the ride of your life at Tesla.”

That turned out to be good advice from Tesla, a major American automaker, energy storage company and solar panel manufacturer.

“Not much to my surprise, every day has been just another roller coaster ride here,” said Goli, who is in the middle of his summer internship at the company’s manufacturing facility in Fremont, California. “I solve problems on a daily basis, and no challenge is a familiar one. Tesla is a unique company, and I’m enjoying every opportunity that comes my way.”

There is no such thing as an average day at Tesla for Goli, who works for the Lean Manufacturing and Operational Excellence team.

“Our job is to find better workflows, conveyance, inventory management and optimize processes throughout the factory to achieve the maximum output they can with optimal inputs, be it human resources, inventory, space, etc.,” he said.

At one of the company’s All-Hands meetings, Goli met Elon Musk, CEO of Tesla Inc. and of SpaceX, an aerospace manufacturer and space transport services company. Goals of the South African inventor and entrepreneur include reducing global warming through sustainable energy production and consumption and reducing the risk of human extinction by establishing a human colony on Mars

Goli interacted with Musk over a couple of questions at the meeting.

“He is an inspiring leader and strives to set his people up for success in all ways possible,” said Goli. “The experience was surreal. It was a fan-boy moment because he’s been my inspiration and idol for years now.”

Goli said Tesla has been a good way for him to apply what he learned at Wright State and to learn things outside of the university.

“I get to learn continuously from my managers, colleagues, production associates and almost everyone I meet here — not just work and subject specific, but also life in general,” he said.

“I come from a mechanical-engineering background, and I’ve had keen interest in learning how machines work,” said Goli.

His curiosity drew him to learn how machines interacted with human resources and material to produce finished goods. Then he wanted to learn ways to design integrated systems that optimized resources, supply chain management and ergonomics while maintaining profits.

That led him to the study of industrial and human factors engineering.

He was attracted to Wright State by one of his undergraduate colleagues in India, Pandu Ranga Reddy Aluvala, who had enrolled at Wright State and recommended it.

“He shared his experiences here and explained how the diverse student community and faculty at Wright state helped him be successful,” Goli said. “Also, the infrastructure and facilities at the university amazed me.”

After some intense research about the faculty and the campus, Goli enrolled at Wright State in the College of Engineer and Computer Science in 2015.

Goli attributes his success at Wright State to the guidance and mentorships of engineering faculty such as Frank Ciarallo, Xinhui Zhang, Govind Bharwani and Pratik Parikh as well as classmate Abhinay Reddy Boddu, who has been a source of inspiration and support.

“Dr. Parikh always went out of his way and spent time with me whenever requested,” said Goli. “I think when people of that stature with busy schedules spend time for the silliest of things, it shows how much they care and are dedicated to helping you be successful.”

After graduation, Goli would like to work at Tesla full time.

Tesla’s mission is to accelerate the world’s transition to sustainable energy. To achieve that goal, the company plans to produce electric vehicles in sufficient volume to force change in the automobile industry. By 2018, Tesla intends to make more lithium ion batteries, at its Gigafactory outside Sparks, Nevada, than were produced worldwide in 2013.

And last year, Tesla merged with SolarCity Corp., which integrates Tesla’s operations with the installer of rooftop solar panels.

“This is a wonderful time to work here at Tesla and be a part of accelerating the world’s transition towards sustainable existence and sustainable transportation,” Goli said.