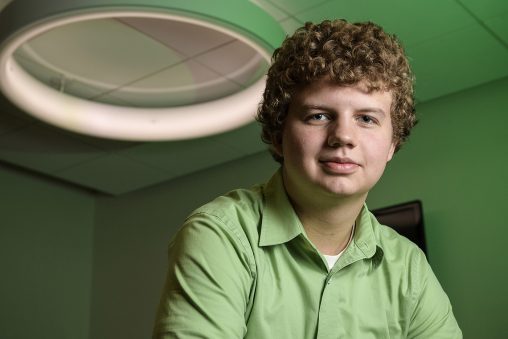 When he was only 5 years old, Logan Blazier had already figured out the mechanical mysteries of hinges and exactly how they functioned.

“I’ve always had an engineering mindset,” he said.” I remember sitting and just watching things work.”

Blazier landed a summer internship at Leidos and is currently working for the company part-time.

Leidos is a global company that integrates and applies information technology, engineering and science in the areas of defense, intelligence and health. The company recently selected Wright State to join Leidos’ Strategic University Alliance program, a partnership that has resulted in the company financially supporting student engineering projects.

“I really, really enjoy where I’m at,” said Blazier, who works in Leidos’ Beavercreek office. “It’s a great company. I like everything that I do there.”

He utilizes computer-aided drafting software and runs advanced simulations such as Finite Element Analysis and Computational Fluid Dynamics to test the strength of designed parts.

Blazier grew up in Marion, Ohio. After the terrorist attacks of 9/11, his parents went from serving in the Army Reserves to active duty as part of the surge and were deployed to Iraq, where his father was an infantryman and his mother was in charge of distributing vital water supplies.

For the next two years, Blazier — who was just starting kindergarten — would live with his grandmother in Indiana. After leaving the Army, his parents worked for defense contractors and then for various other civilian employers.

After graduating, Blazier wasn’t sure he wanted to go to college because while he liked learning, he didn’t care for the regimented structure of school.

However, Blazier visited several universities and decided to attend Wright State, which awarded him a scholarship.

Blazier likes how the campus is a blend of suburban and urban living and is located next to Wright-Patterson Air Force Base.

“The Air Force is right on my doorstep,” he said.

When he is not studying or working, Blazier likes to play video games and has earned every achievement in the critically acclaimed “Call of Duty 4: Modern Warfare.”

He also enjoys woodworking. He has built tables, planters and even a solid oak chair with a retractable stepstool.

“My roommates were just using it to hang up some lights,” he said.

After graduation, Blazier would like to work full-time for Leidos, drawn by the excitement of a career with a large defense contractor.

“I want to build these high-level engineering systems,” he said.