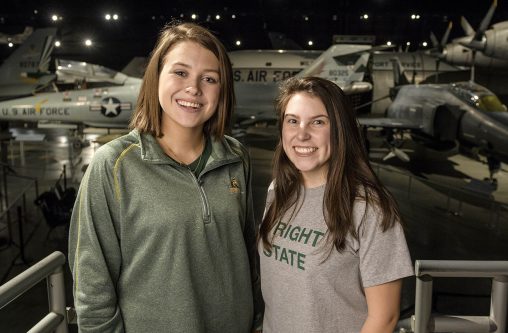 Christina Davis, left, and Andrea Poole, freshmen in the Department of Biochemistry and Molecular Biology, were part of a team that won a gold medal for their research project at a competition sponsored by MIT. (Photo by Erin Pence)

The concept of a pill designed to prevent or minimize bacterial illness among deployed military personnel put two Wright State University students on a squad that won gold in an international competition that drew more than 300 teams.

Andrea Poole and Christina Davis were part of a 10-member team of high school students who competed in the International Genetically Engineered Machine (iGEM) Competition sponsored by the Massachusetts Institute of Technology and held in Boston last November.

Davis and Poole’s team was one of only 10 high school teams that won gold medals in the competition, which included undergraduate and graduate college teams.

“It was very exciting,” said Davis, of Beavercreek.

“The judges were really impressed with how much we knew,” added Poole, of Huber Heights.

Poole and Davis are both freshmen majoring in the matrix Department of Biochemistry and Molecular Biology in the College of Science and Mathematics and Boonshoft School of Medicine at Wright State University. They are also both student research assistants at the Air Force Research Laboratory (AFRL) at Wright-Patterson Air Force Base — Davis in the 711th Human Performance Wing and Poole in the Materials and Manufacturing Directorate.

The project for the competition was conceived when Poole and Davis were students at Carroll High School in Dayton and interns at AFRL.

“We discussed issues the Air Force would face and we ultimately came up with the idea of dealing with traveler’s stomach,” said Davis, adding that it was Poole’s idea.

Traveler’s stomach or traveler’s diarrhea is a stomach and intestinal infection commonly caused by Entertoxigenic Escherichia Coli, or ETEC, a pathogenic form of E. coli. In addition to diarrhea, it can cause nausea, vomiting, weakness, dehydration, lack of appetite and result in hospitalization.

“We did some research and we found that ETEC is one of the largest sources of traveler’s stomach among deployed airmen,” said Poole.

The student team figured out how to make a non-pathogenic E. coli microbe, bind it in insoluble cellulose and use the cellulose capsule as a way to detect ETEC by giving off a fluorescent green color. Detecting ETEC in drinking water would prevent its ingestion and detecting ETEC in the human body would enable early treatment.

The student team then entered its project, titled “Engineered Microbes to Sense and Respond to ETEC,” in the iGEM competition, which enables students to push the boundaries of synthetic biology by tackling important global issues.

The iGEM teams design, build, test and measure systems of their own design using interchangeable biological parts and standard molecular biology techniques. Every year, nearly 6,000 people dedicate their summers to the projects and then compete in the fall.

In addition to making a 25-minute presentation to the judging panel of scientists and business leaders, Davis, Poole and their teammates took part in outreach efforts, going into grade schools to talk about synthetic biology.

Poole said the judges were excited about the project, which may be carried on by the next iGEM team at Carroll High School.

“They really wanted us to continue it and see where it can go next year,” said Poole.

Both Davis and Poole want to pursue doctorates and continue to do research.