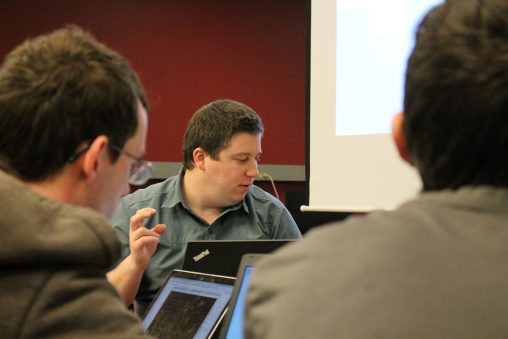 Ever fought against a cyber attack? Wright State students will get the chance to defend a computer on Saturday, March 24, at the inaugural Cyber Raider competition. The competition takes place from 9 a.m. to 4 p.m. throughout the Russ Engineering Center and Joshi Research Center.

Since students will coach the teams, it gives the opportunity for a varied level of support for each team. For example, if a team is technically minded or is made up of computer engineering or science majors, the coach does not need to offer as much support.

Matthew Kijowski, computer systems administrator in the Department of Computer Science and Engineering and Cyber Security Club adviser, said the event revolves around defense and investigation rather than attacking.

One of the challenges Kijowski plans to initiate during Cyber Raider is that of ethics. He works with the Cyber Security Club frequently about issues of ethics, since it is sometimes difficult to know what is ethical and what is not.

“There’s all sorts of concerns with ethics. For example, if you’re using software to deep-scan a network, that’s like walking up to someone’s house and trying the handle and the windows to see what’s open,” he said. “If you did that in real life, you would get arrested, so we want to make sure students are aware of the laws.”

The goal of Cyber Raider is to educate everyone across campus about cybersecurity. For example, Kijowski said that if two roommates live together, one computer could be well-protected while the other could be wide open to a cyber attack.

“Our hope is that the challenges might be useful to students in that they see some of the risks involved with technology and know how to protect themselves,” he said. “We just want to see everyone get a good education beyond what you would expect from cybersecurity messages, not just changing your password every six months. But we’ll give them the tools to investigate a network to find all the information that’s all just sitting there.”

To organize Cyber Raider, the club partnered with other organizations, including Wright State’s Army ROTC, which helped fund the event, as well as the Department of Computer Science and Engineering, Ball Aerospace, Edaptive Computing and Leidos.