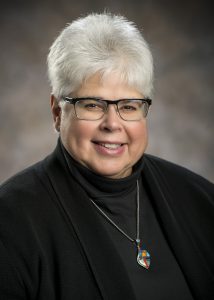 Evangeline Andarsio will serve a one-year term as president of the Ohio State Medical Association.

Evangeline C. Andarsio, M.D., of the Wright State University Boonshoft School of Medicine, has been named president of the Ohio State Medical Association (OSMA), the state’s largest physician-led organization. She was sworn in during the association’s annual meeting on April 14.

Andarsio is a clinical associate professor of obstetrics and gynecology at the Boonshoft School of Medicine. She retired from clinical medical practice in January 2016 after serving as an obstetrician-gynecologist for more than 25 years in Dayton.

“As president of the Ohio State Medical Association, I look forward to representing the voice of Ohio’s physicians,” said Andarsio, who will serve a one-year term. “Working together, our organization can continue to bring physicians together for a healthier Ohio.”

She will work with the OSMA Council and House of Delegates to develop policy on a variety of issues affecting physicians and patients in Ohio.

“Advocacy has been a pillar of the Ohio State Medical Association since its inception. But now, more than ever, physicians must be willing to engage in the process,” Andarsio said. “Our state representatives and all active OSMA members must be vigilant and work together to develop policy and find solutions.”

In her new role, Andarsio also will remember the tremendous challenges and stresses that are placed on practicing physicians, residents, fellows and medical students, which may lead to burnout.

“The issue of physician burnout is essential to address because it has the potential for serious consequences on patient care and safety, professionalism and the viability of the heath system,” Andarsio said. “The Ohio State Medical Association can play an important role in developing policy throughout the physician’s professional life cycle to advocate for physician well-being and resiliency, especially in the area of workforce environment by reducing regulatory burdens and improving electronic health records and other system problems.”