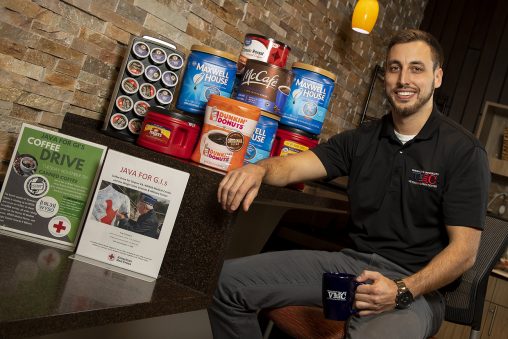 Nathan Gunter, a Wright State graduate student and Navy veteran, is coordinating the Java for GIs coffee drive, a partnership of the university’s Veteran and Military Center and the Dayton Red Cross. (Photo by Erin Pence)

When Nathan Gunter was a Navy operations specialist on an aircraft carrier in the North Arabian Sea, enduring sweltering 110-degree temperatures, drinking hot coffee was the furthest thing from his mind. But today, he invites people to donate coffee to veterans through Java for GIs, a collaboration between Wright State University’s Veteran and Military Center (VMC) and the Dayton-Area Chapter of the American Red Cross.

“Java for GIs is not only a great opportunity to give back to local veterans, but a chance to give veterans a gift that will ultimately bring them together, a simple cup of coffee,” said Gunter, community engagement coordinator for the VMC.

He also encourages people to sit down and share a cup of coffee with a veteran and listen to their stories.

“This year for Veterans Day, the VMC is collaborating with the Dayton Area Red Cross for a coffee drive to support veterans and active duty service members at the Dayton VA, the Red Cross office at the WPAFB Medical Center and of course, the VMC,” said Seth Gordon, VMC director and a member of the Board of Directors of the Dayton Red Cross.

Donations of sealed, canned, bagged or boxed coffee, including K-Cups, can be dropped off at the donation bin in the VMC, 131 Allyn Hall, through Dec. 7. Coffee may also be dropped off at the Red Cross Dayton office, 370 W. First Street in downtown Dayton. Red Cross volunteers will deliver the coffee to the three sites on Dec. 15, just in time for the holidays.

“Thank you to everyone who can help,” Gunter added. “Coming for a veteran, it’s very meaningful.”

To kick off the coffee drive, the VMC is hosting a live Veterans Voices event, open to the public.

“We will be listening to stories by veterans about veterans from the most recent season of Veterans Voices on WYSO and then watch a live ‘Veterans Voices’ oral history interview with Cory Paul, an Army veteran and the executive director of the Dayton Area Red Cross,” Gordon said.

“Veterans Voices” is a collaboration between the VMC and WYSO Public Radio. The series features stories of Miami Valley veterans talking about their military service and re-entry into civilian life. The stories are reported by Wright State student veterans trained in WYSO’s Community Voices model. The fourth season of “Veterans Voices” is winding up on WYSO. Each story is archived on wyso.org.

Gunter studied criminal justice for a year at Wright State’s Lake Campus before enlisting in the U.S. Navy. After his stint in the Navy from 2011 to 2015, which included two deployments to the Middle East, he returned to Wright State and earned a bachelor’s degree in communication. Today, he is a graduate student working on his master’s in public administration.

Setting his sights on a career in nonprofit administration, Gunter interns with Dayton Red Cross, serving on its associate board.

“The Red Cross helps members of the military, veterans and their families prepare for, cope with and respond to the challenges of military service,” said Gunter.