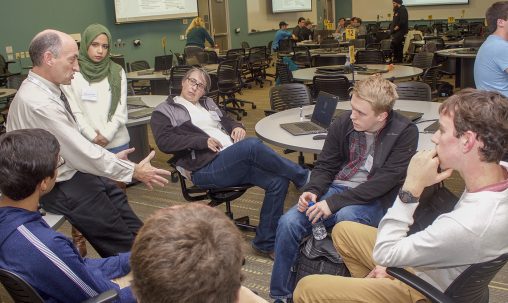 Students from a variety of majors dreamed up ways military medics could evaluate injured personnel from the battlefield during Innovation Weekend, hosted by the College of Science and Mathematics.

More than 40 students gathered on Nov. 2–4 for a weekend of innovation that could change the way military medics evaluate injuries on the battlefield. These ideas came from Wright State University’s second Innovation Weekend, which encourages students of different majors to come together and create a solution to a common problem.

During this fall’s event, students discussed ways to enable efficient scanning of internal injuries, both in military and civilian settings.

Douglas Leaman, dean of the Wright State College of Science and Mathematics, opened the event with a welcome to the students, encouraging them all for the coming activities and sharing his enthusiasm for the variety of backgrounds the students brought with them to the event.

“What we have here are cross-disciplinary teams that are all here to solve real-world problems,” he said. “This region is a hub of workforce development and technology.”

Accompanying and assisting the students were mentors who discussed the projects with the students and guided their discussions by answering questions.

The students spent Saturday, Nov. 3, discussing their ideas and refining their projects. At the beginning of the morning, participants wrote their ideas on whiteboards and students voted on the project they wanted to work on by joining that group next to their board. In the end, a total of five groups emerged.

On Sunday, Nov. 4, the groups finalized their ideas and presented their work to a panel of judges, who are from Leidos, which sponsored the Innovation Weekend and provided the prompt, Wright State and the Wright State Research Institute. The groups came up with several ideas, such as an early detection band for patients with cardiovascular disease, portable sensors for use by first responders in a civilian setting and approaches to connect sensors in a suit to an app that could help Army medics prioritize soldiers who are in critical condition. 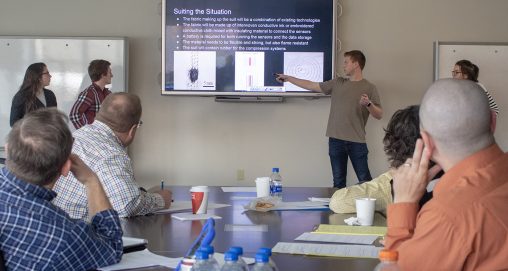 Participants presented their ideas to a panel of judges from Leidos, which sponsored the Innovation Weekend, Wright State and the Wright State Research Institute.

Two teams took home cash prizes of $500 and $250. The first-place team pitched sensors that first responders could use to find internal bleeding, a stroke or lung or heart problems. The second-place winners suggested a suit that would monitor a soldier’s pulse on their extremities and would be capable of triggering a tourniquet in the suit.

Leigh Schukert, a senior mechanical engineering major, was encouraged to participate through her internship program. She said she was glad to see so many students at Innovation Weekend.

“It was great meeting other people who were so passionate about the project,” she said. “It was a fascinating experience and it was really encouraging.”