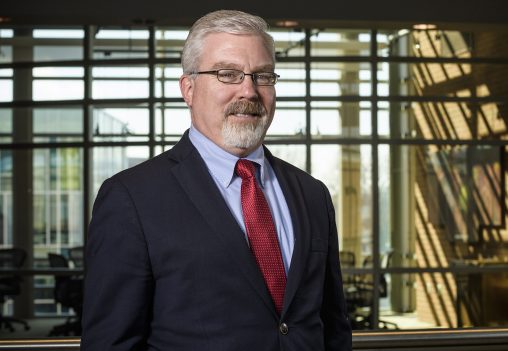 Gary Dickstein, interim vice president for student affairs, was honored by the Association for Student Conduct Administration with its the Donald D. Gehring Award. (Photo by Erin Pence)

He was a sophomore in college contemplating his future when a mentor suggested a career working with college students.

“You mean I could get paid to stay at college?” Gary Dickstein remembers saying. “So I started learning more about the profession of student affairs.”

That turned in to a 30-plus-year career in the field — 26 of those years at Wright State University, where Dickstein is interim vice president for student affairs.

On Feb. 9, Dickstein received the Association for Student Conduct Administration’s 2019 Donald D. Gehring Award, the highest honor bestowed by the leading voice for student conduct administration within higher education. Gehring is the founding father of ASCA.

“Of all the awards that are available in the association, this is very special knowing that my contributions to our field have been acknowledged, especially because it’s peer-nominated,” said Dickstein, who was presented with the award during the association’s annual national conference, in Jacksonville, Florida. “It’s really humbling, and it’s one of the highlights of my career.”

Dickstein, who grew up in suburban Detroit, has a family history in education. His mother taught fifth grade for 45 years; his father taught 12th grade for 12 years and then became a labor negotiator for the Michigan Education Association.

After earning his bachelor’s degree in social work from Western Michigan University in 1988, Dickstein spent two years working in student affairs at Sam Houston State University in Huntsville, Texas, and three years at San Diego State University. He then joined the staff at Wright State as manager of The Village apartments and Greek Life adviser.

While Dickstein was at Wright State, he earned his master’s degree in higher educational administration and then went on to earn his Ph.D. in the same major from Ohio University, graduating in 2011. His dissertation focus was on student disciplinary interventions strategies utilized by institutions to resolve misconduct of students who are concomitantly experiencing a mental health crisis.

The Gehring award recognizes an exceptional student conduct professional who has contributed significantly to the development of their campus, the field and professional organizations.

Dickstein is former president of the association, member of its board and was responsible for the creation of the group’s Raymond H. Goldstone Foundation. He is a well-known presenter on a variety of student conduct administration topics such as threat assessment and behavioral intervention teams, codes of student conduct, mental health, and student and Greek organizations.

“Gary has been active throughout his career in promoting equity and diversity, as well as demonstrating a commitment to it,” Jeff Stefancic, associate dean of students at Purdue University, wrote in his nominating letter. “Some of this is most evident in his work in the Dayton, Ohio, community, where Gary has served on task forces associated with preventing sexual violence and harassment at his children’s high school (and) as a volunteer at the Heal Dayton Free Clinic.”

Dickstein, who is often called on to deal with personal student-related issues on campus, is known for his ability to connect students with the resources they need.

“What I’m most proud of is what I believe is the difference that I’ve been able to make with literally hundreds, if not thousands, of students in helping them get to the finish line and graduate,” he said.