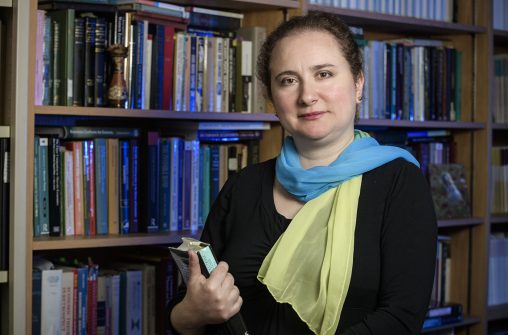 Zdravka Todorova, chair of the Department of Economics, participated in the North American Convening of the Young Scholars Initiative. (Photo by Erin Pence)

“Caregiving is central in the economy, yet often it is invisible in economic analysis and in everyday interaction.”

This is the message that Zdravka Todorova, professor and chair of the Department of Economics at Wright State University, delivered at the North American Convening of the Young Scholars Initiative that ran Feb. 22-24 in Los Angeles. The initiative promotes innovative scholarship in economics through international working groups and is sponsored by the Institute for New Economic Thinking. Organizers said the gathering was designed to create a vibrant environment in which to explore new economic thinking free of intellectual barriers.

Todorova’s research looks at economic activity that is driven by diverse relations, including gift-giving, reciprocity, obligation and sacrifice.

“In addition to sharing my approach to care in the economy, I will serve as a mentor for doctoral students in economics commenting on students’ research moving forward,” said Todorova. “Care is central, yet often is invisible in everyday interaction.”

For example, she said technical support from staff in Wright State’s Distance Education enabled her to produce a valuable webinar that ultimately led to her being a mentor in the network. And the university’s Write it Up! career development program, which is designed to boost writing productivity, helped her continue her research.

“Support from staff is less visible, yet it is instrumental for project completion,” she said.

Todorova presented her webinar “Feminist Economics and Social Provisioning” in December to three economics working groups that are part of the Young Scholars Network, which is comprised of about 7,000 graduate students from around the world forming 14 working groups.

The webinar led to Todorova being invited to be one of 30 mentors and 150 presenters at the Young Scholars Initiative in Los Angeles, which drew about 300 participants.

“The broad theme was the interrelations among paid and unpaid care work, households, states and communities,” she said. “I commented on topics such as inequalities of distribution of time digital era and unpaid care work; discrimination and socio-economic status; labor migration and gender; and diversity.

“I am happy to see that the Young Scholars Initiative facilitates mentorship outside the walls of universities, disciplines, and countries,” she added. “I am excited to provide direction for student research, and I am looking forward to continuing this engagement.”

Todorova earned her doctoral degree in economics at the University of Missouri-Kansas City. She joined the faculty at Wright State in 2006 and became a full professor and chair of the Department of Economics in 2017.

“There is an effort in economics to make the invisible visible and to open up conceptions of economic life to diverse experiences and questions. It is exciting that this has become part of global networking among doctoral students in economics,” she said. “It is important to see the study of economics as a broad and welcoming field that can be connected to all aspects of people’s lives.”