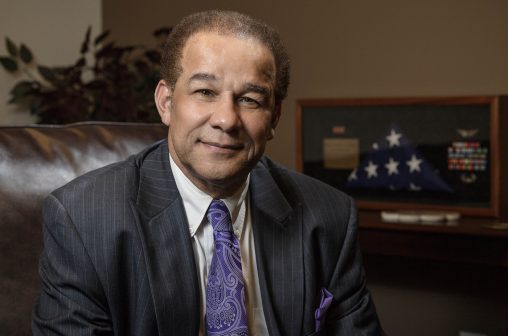 Larry James, a decorated Army veteran and professor in the School of Professional Psychology, will receive the John C. Flanagan Lifetime Achievement Award from the Society of Military Psychology. (Photo by Erin Pence)

Wright State University psychology professor Larry James, a decorated soldier with a long record of serving the military and the nation, has been selected for the highest honor bestowed by the Society of Military Psychology.

Flanagan was an Army colonel and considered the father of aviation psychology. He was also known for developing a technique that identifies and classifies behaviors linked to the success or failure of human activity.

“To have my name associated with his in any way, shape or form is just a huge, huge honor,” said James, professor in the School of Professional Psychology.

James is a 22-year Army veteran and retired colonel. He was deployed to combat zones four times, was blown off his feet by bomb blasts several times in Iraq and over his lifetime has made 63 parachute jumps.

James spearheaded an effort to provide mental health services after terrorists flew a Boeing 757 into the side of Pentagon on Sept. 11, 2001, collapsing a portion of the building and killing 125 occupants. He was chairman of the psychology department at Walter Reed Army Medical Center and led teams of mental health professionals into the burning building. And from Sept. 11 through December, the teams provided psychological services near the Pentagon to victims of the attack and their families.

Achievements James is most proud of include a program he developed in 1992 in Hawaii to address the suicide rate of soldiers, which was five times the national average.

“In the three-year span I was in that duty assignment, there was not one suicide at the Army post in Hawaii,” he said. “I’m very proud of that.”

James is also proud of the policies he developed that outlawed the use of any abusive tactics in the interrogation of military prisoners.

And he is proud of and grateful for his 42-year marriage to Joan James.

“Somehow amidst all of the military moves and 10 deployments, I’ve maintained that family balance,” he said.

James, who has been at Wright State for 11 years, is former dean of the School of Professional Psychology and has a private practice in Beavercreek, where he trains and supervises SOPP doctoral students. During the fall semester, he will teach Psychopharmacology, Integrative Psychotherapy and Health Psychology.

“What I wanted to do in my career was to make a contribution and a sustained contribution over the course of my career,” he said.

James is more productive today than he was 20 years ago in terms of the number of patients he sees, the number of students he supervises and his publishing record.

He said Wright State has given him the freedom and support to create and develop programs.

“Another thing about Wright State is it is a military-friendly community,” he said. “So as other colleagues of mine around the country were being attacked for their military service, that really didn’t happen here. I always felt welcomed and respected and supported.”