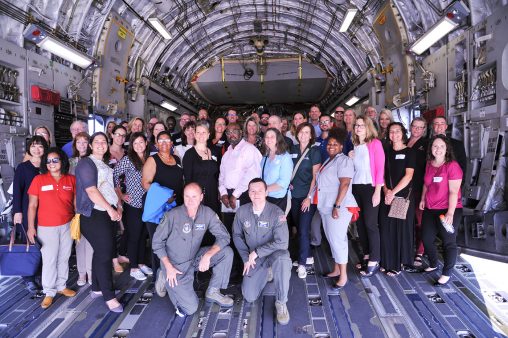 Wright State faculty, staff and administrators were part of a delegation of higher education representatives who toured Wright-Patterson Air Force Base.

It was a rare inside look at Wright-Patterson Air Force Base for Wright State University faculty, staff and administrators. And Air Force officials took the opportunity to underscore the importance of higher education to national defense and to detail the numerous career opportunities for college graduates.

It was all part of the daylong Miami Valley Higher Education Consortium Tour on Aug. 6. The 40-plus-member delegation also included representatives from Central State, Clark State, Sinclair Community College, the University of Dayton and Wittenberg.

The delegation was greeted by Col. Thomas Sherman, commander of the 88th Air Base Wing.

“So much of our population — our people in the Air Force right now that we’re getting — are coming from your very institutions,” Sherman said. “That’s why what you do is so important because laying that basic foundation of education or thirst for learning or just giving them something to think about is that very thing that may open the door and may completely change their stars.”

Wright-Patterson is the largest single-site employer in Ohio, with nearly 30,000 military, civilian and contractor employees. It generates an annual economic impact of $15 billion in the state.

Sherman said most of the workers at the base are currently between the ages of 45 and 65.

“That means we have a whole lot of people in the autumn or winters of their careers,” he said. “And we’re going to need to do a workplace replacement in the very, very near future because these folks are starting to segue into a different part of their life.”

Sherman said the Air Force is looking for workers of all types of backgrounds and experience, not just those in STEM.

“We need people who have the ability to think differently,” he said. “We need those who can master foreign languages. We need people who understand the importance of history as we develop policy and strategies.”

Situated on 8,145 acres, Wright-Patterson has 588 buildings, three runways and 97 miles of roads. It is home to the 88th Air Base Wing and more than 100 mission partners, including Air Force Materiel Command, Air Force Research Laboratory, the National Air and Space Intelligence Center and the Air Force Life Cycle Management Center.

Sherman said there are a multitude of civilian and contractor jobs for those who don’t want to enlist in the military. For older, more experienced graduates, there are supervision opportunities. And international students can work with the Air Force as non-citizens if they enlist.

“Thank you for what you’re doing for the people that we’re getting in the Air Force,” Sherman told the delegation. “We don’t run without you being there.”

Wright-Patterson has started an apprentice program to help students develop vocations needed by the Air Force by working part-time on the base. There are also opportunities for students to learn science and technology in summer sessions at the United States Air Force, Naval and Military academies.

Wright-Patterson is also trying to step up its presence at career fairs. And it is working to get direct-hire authority where qualified candidates can be offered jobs and hired on the spot.

After meeting with Sherman, members of the delegation were taken in buses to the flight line, where they toured a C-17 cargo plane.

One of the pilots, 49-year-old John Smith, earned his bachelor’s degree in education and his master’s in geological science from Wright State. He joined the Air Force out of high school, was assigned to Wright-Patterson in 1988 and currently flies for the Air Force Reserve when he’s not teaching math in Beavercreek Public Schools.

“This unit has been everywhere,” he said. “We’re trained to go at a moment’s notice.”

After the C-17 tour, the delegation visited the Rapid Development Integration Facility, the Defense POW/MIA Accounting Agency and the Agile Combat Support building. The tour was capped by a demonstration from the Honor Guard and a visit to a facility that provides combat gear to deploying Airmen.

Tim Littell, associate vice provost of student success at Wright State, was among those on the tour.

“As I was blown away by each session thinking ‘this one was the best,’ our bus would take us to the next that was even more impressive,” he said. “By the end of the day, I was completely overwhelmed and moved by all of the great people we met and all of the great work that they do.”