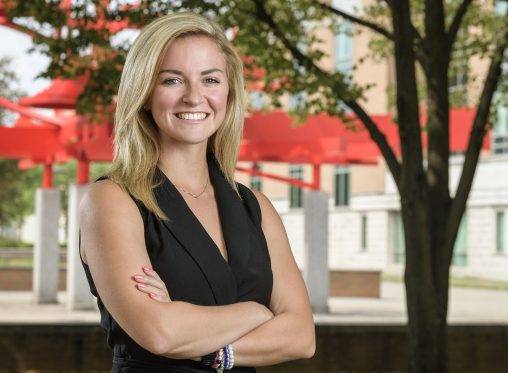 Mandy Shoopman, an MBA student at Wright State University, wanted to help people affected by the Memorial Day tornadoes. Inspiration struck her when Shoopman, an avid runner, was returning home from a local road race.

She decided to organize a tornado relief event that also allows participants to have fun running or walking. Road races, she said, can bring people together.

“I find road races to be extremely fun, and it just makes it even better when I know the race is supporting a cause that hits so close to home,” she said.

The course travels through areas of Five Rivers MetroParks that were affected by the tornadoes.

Participants can register for the run/walk event online by Sept. 13 or at Island MetroPark the day of the race beginning at 10:30 a.m.

Thanks to support from the event’s sponsors, participants can run or walk for free. Participants are encouraged to donate food or money to the Foodbank when registering online or in person at the race.

The event, Shoopman said, “gives our community a chance to come together after the recent tornadoes and raise money for an organization that has been so supportive in aiding our friends and family through this difficult time.”

Some of Shoopman’s classmates and friends from Wright State were personally impacted by the tornadoes throughout Beavercreek and Vandalia.

“I firmly believe our Dayton community does a wonderful job at supporting our friends and families when such an event as this happens,” she said, “and I wanted to be a part of something that was making a huge difference to all those who were affected.”

The event has taken on even more significance for Shoopman, as Dayton also recovers from a mass shooting in the Oregon District. She hopes the race brings friends and families together to spread happiness in the community.

“We can run, walk or just simply be a part of the event and show that no matter what, we will always remain #DaytonStrong,” she said.

Shoopman decided to make The Foodbank the beneficiary of her event because of the organization’s impact throughout the community.

“Hunger relief is so important in our community, and The Foodbank strives to make sure everybody they serve is fed healthy and nutritious meals, which I believe is essential,” she said.

Shoopman, who received her bachelor’s degree in accountancy from Wright State in 2018, works at Wright-Patterson Air Force Base at the Air Force Life Cycle Management Center.

Shoopman herself is a runner and will participate in the fundraising event. She started running about five years ago, saying that over that time it has become a lifestyle more than a pastime. She trains at least five days a week and runs around 10 road races a year. She completed her first marathon, the Air Force Marathon, last year. This year, she has finished the Flying Pig Marathon in Cincinnati and several local road races and is training for the Columbus Marathon in October.

Volunteers are needed to assist during the Dayton Tornado Relief 5K/10K Run/Walk. Contact Shoopman at shoopman.5@wright.edu to volunteer.