At Homecoming this fall, Wright State to launch inaugural Festival of Flight

Wright State has partnered with some of the Miami Valley’s leading aviation and community organizations to organize a new local festival dedicated to flight.

The Festival of Flight will celebrate aviation and highlight the importance of the Miami Valley’s aviation heritage on the grounds of the Wright State University Nutter Center on Saturday, October 5. The festival will run from 10 a.m. to 8 p.m., culminating with a Wright State men’s soccer game.

The free festival will appeal to families from around the Miami Valley and aviation enthusiasts across the country. The event is expected to attract an estimated 10,000 to 12,000 people. Alumni, friends, and families can return to Wright State to catch up with classmates and enjoy a beautiful fall day on campus.

Attendees will experience aviation-related educational experiences; flight-themed food and beverages, including beer and wine flights; sports; and entertainment, including performances by local bands, a dedicated area with activities for children, and a haunted trail.

Learn more about Festival of Flight

Plenty for sports fans to cheer about during Festival of Flight

Discover hidden gems of aviation in the Miami Valley

The Festival of Flight will incorporate the university’s annual Wright Brothers Day celebration, which marks the anniversary of Wilbur Wright’s 39-minute flight on Huffman Prairie on October 5, 1905. The flight demonstrated that the Wright brothers had advanced their design to the point of a practical airplane. As part of the Wright Brothers Day celebration, the festival will showcase innovations from Wright State researchers and the local community.

“When Uncles Orv and Will first ‘imagined’ the role their flying machines would play in the world, they predicted their aeroplanes would be used for sport and pleasure . . . and that ‘flight’ would link neighbors and strangers,” said Amanda Wright Lane, great grandniece of Wilbur and Orville Wright. “Over 100 years later, the organizers of Wright State’s inaugural Festival of Flight are designing an event that will do just that—join all members of our community through sport and entertainment, while celebrating a world-transforming technology born only a few miles away!”

“We are the birthplace of aviation; Wright State is named in honor of the Wright brothers; Huffman Prairie is in the heart of Fairborn,” said Greg Scharer, executive director of alumni relations at Wright State. “The Festival of Flight is a celebration of something our community takes pride in and will help make even more members of the public aware of the importance of aviation to our community.”

The festival will introduce attendees to many of the hidden gems of aviation-related resources in the Miami Valley.

“It’s no secret that the Dayton community takes great pride in our rich aviation legacy. What this festival will provide is the ability to engage young and old alike in the heritage of aviation as well as STEM aspects of flight,” said Amy Spowart, executive director of the National Aviation Hall of Fame. “Through exhibits, interactives, sports, and the arts, our festival will have something for every member of the family.”

Much of the festival will focus on providing educational experiences for attendees, especially children. 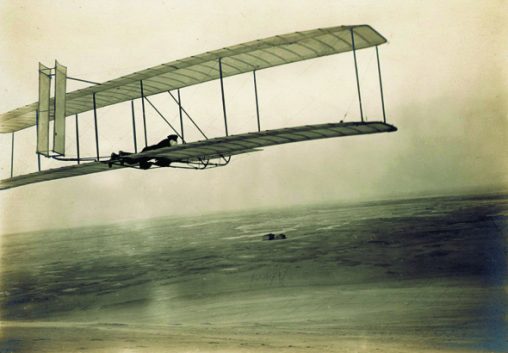 Demonstrations will help educate attendees about the history and future of aviation. Sinclair College’s unmanned aerial system training center will put on drone demonstrations. Other educational experiences will be provided by the Dayton Regional STEM School, Wright State’s Special Collections and Archives, the College of Engineering and Computer Science, the National Aviation Heritage Alliance, the Aviation Trail Parachute Museum, and the International Women’s Air and Space Museum.

The Dayton Regional STEM School will create an event passport to encourage students to visit age-appropriate educational activities in exchange for extra credit in their home school districts.

Music fans can dance to live performances by bands on the City of Fairborn stage from noon to 8 p.m.

Food and beverages will have flight themes to add to the day’s fun. The festival will offer popular food trucks and local restaurants as well as beer and wine in the dining tent.

A World War II bomber and World War I biplanes will fly over the festival grounds.

Sports fans will have plenty to cheer about as well. The USA Patriots will play exhibition softball games against an all-star team of local military personnel and first responders and the Dayton Legends Softball Club all-stars. Formerly known as the Wounded Warrior Amputee Softball Team, the USA Patriots are composed of veterans who have lost limbs in combat or from non-combat injuries. Team Fastrax Professional Skydiving Team will parachute in the U.S. flag during the game’s opening ceremony.

Also planned is a vintage baseball game between the Cincinnati 1869 Red Stockings and Dayton’s Eastwood Iron Horses. Wright State’s NCAA Division I volleyball, men’s soccer and softball teams, along with the club football team, will play during the festival. Heater and Gem, the Dayton Dragons mascots, and Rowdy Raider will be in attendance to entertain the kids.

Wright State students will participate in a parade of golf carts they will decorate with flight themes.

Each year, the Festival of Flight will take place during the first weekend in October.