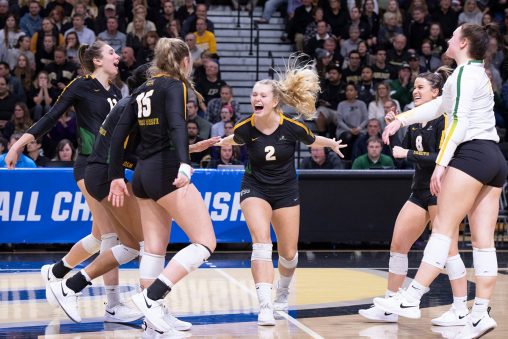 Playing in its first NCAA championship match in program history, the Wright State volleyball team fell to No. 16 Purdue on Dec. 6 in three sets, capping a magical season that saw the Raiders win 24 matches and the program’s first Horizon League regular season championship on the way to earning the first NCAA at-large bid in Wright State athletics history.

Against the national seeded Boilermakers, the Raiders dropped the opening set 25-9 before a 25-22 second set loss and a 25-11 third set score.

Wright State’s 24 victories this season are the fourth-most in program history and the most since the 1989 campaign. The Raiders, who won 54 total games total from 2011-2017 (including 20 league matches) have won 39 matches in two seasons under Allie Matters, including 20 Horizon League matches over that span.

Wright State head coach Allie Matters: “I’m pretty overwhelmed right now, to be perfectly honest. This has been a whirlwind of a season, and I think that there were times throughout the season when we thought, we talked about this might be our last match. This could be our last match, specifically for the seniors, and we bought ourselves an at-large bid. That is something that it’s a first ever for any sport at Wright State University. That was powerful for us. We were able to play in an environment that we hadn’t all year, and I thought that we held our own at times, and sometimes we didn’t. I’m really proud of this group and what they have accomplished.”

Senior Taylor Gibson: “This is going to make me emotional, but it just warms my heart to be able to be sitting right here with (Hannah Colvin) and Allie. I would have never thought I could do this or we could do this.”

Senior Hannah Colvin: “It’s been really special. We always talked about leaving a legacy, and we couldn’t have asked for a better season to go out on.” 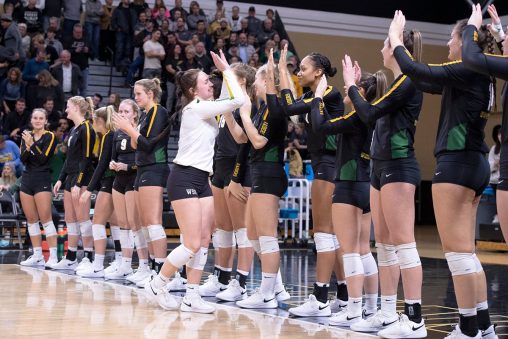 The Raiders started the night off with a kill from Alders, but Purdue answered back with a kill to tie the match at 1-1. The Boilermakers went on a five-point run to take the lead at 6-2 before Gibson added a kill for the Raiders to shorten the deficit to two points. Purdue reached 10 points with a five-point lead on the Raiders before Baker delivered a kill to stop the Boilermaker run at 14-7. Purdue reached the red zone and went on to win the set 25-9.

Baker opened the set with a kill to give the Raiders their first point. The score was tied at 4-4 as the two teams battled for the lead. Powers and Baker added a kill each to tie the score again at 9-9 before Purdue went on a four-point run to take the lead at 13-11. Alder knocked a kill down to tie the score again at 15, but Purdue reached the red zone leading Wright State by two points. Gibson added the last kill for the Raiders before Purdue went on to win the set 25-22.