She works her magic in the loft studio of her home in the tiny western Ohio village of Casstown.

For artist and Wright State University alumna Kathy Moore, that “magic” has landed her in about 40 national art competitions and for the second year in a row produced artwork that won the top award at the Richmond Art Museum in Richmond, Indiana. For more than a century, the museum has hosted this competition, with works from artists that once included French painter Claude Monet.

In this year’s 121st edition of the show, Moore won with a 36-by-36-inch drawing titled “Three of Hearts Still Life.” She produced it by using a black Conté crayon and an acrylic-like paint to create different shades of gray. The drawing, rouged with only a little color, features seashells, a vase of flowers, a bottle of wine, a tiny blue marble and other objects.

“Kathy’s piece is very well composed and has great line quality in it,” said Lance Crow, education director of the Richmond Art Museum. “And the contrast value in it is very strong.”

Moore uses sight measuring, a technique learned in the Wright State Department of Art and Art History, while she draws or paints. She places masking tape on the floor to mark exactly where she stood in her studio so that when she returns to her drawing or painting she has the same perspective.

Many of the things Moore draws and paints have become old friends. 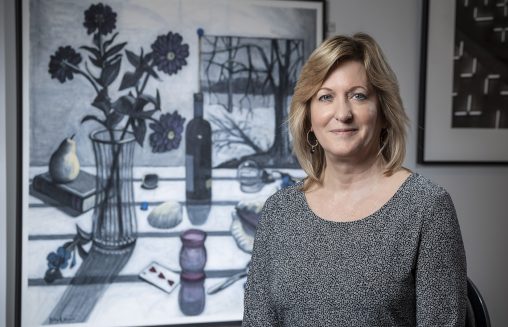 In October, Moore installed 25 landscape and still life paintings at the Meadowlark Restaurant in Dayton. Moore, who has had 15 solo shows over the years, was also accepted as an affiliate member of the First Street Gallery, an artist-run nonprofit cooperative in the Chelsea district of New York City. Seven of her artworks and those of four other artists were exhibited at the contemporary art gallery’s 2019 Affiliate Members Exhibition.

In its promotion of Moore, the gallery said she paints and draws from intense visual observation based on the still life motif. “Her intent is to place the viewer within her immediate visual perspective, as if the viewer is present, stepping out of a spectator role. Within each still life, she aspires to convey a luminous, quiet, and intimate order.”

Moore was part of an Air Force family growing up and moved around a lot. She spent three years at Wayne High School in Dayton but graduated from Largo High School in Largo, Florida.

She began drawing and painting when she was young. Her father would sometimes buy her art supplies at the base exchange.

“And my mother was very instrumental in keeping me involved in the arts,” said Moore. “She must have recognized that I really enjoyed doing it.”

After graduating from high school, Moore returned to Dayton and earned her associate degree in commercial art from Sinclair Community College.

After getting married and raising her two young children, Moore decided to return to college part time.

“Wright State was the school I really was drawn to,” she said. “I wasn’t interested in going to a college that focused a lot on abstract artwork. What I enjoyed doing was more representational art. I also moved from acrylic paints and learned to love the qualities of working with oil paint that was introduced to me at WSU.”

The Wright State art program emphasized working from direct observation and learning how to sight measure, an extremely important tool when working from a still life, which is a work of art depicting mostly inanimate subject matter, typically commonplace objects.

“We would always work from life — whether it was still life, the landscape, or working from the figure. It all really resonated with me,” she said.

After graduating from Wright State in 2003 with a bachelor’s degree in painting, Moore began teaching as an adjunct instructor in drawing and painting classes at Edison Community College in Piqua. She also continued to draw and paint in the studio loft of her home in Casstown, a few miles west of Troy. 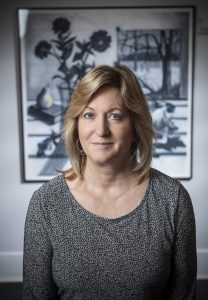 Kathy Moore uses sight measuring, a technique learned in the Wright State Department of Art and Art History, when she draws or paints.

Moore’s first solo show outside of Wright State came at the Rosewood Arts Centre in Kettering.

“I was so excited. I could not believe it,” she said. “I had only been out of college for a year and I was selected for a solo show. I was thrilled.”

Moore attributes her success to a strong work ethic, finding a way to fit drawing and painting into her regular work schedule and always challenging herself.

She also credits her time at Wright State.

Moore teaches five days a week as an adjunct faculty member in the College for Lifelong Learning at Sinclair. Classes are held around Montgomery County, many in community or retirement centers. Most students range in age from 60 to 85 and include beginning, intermediate and advanced skill levels. Most of her students have been taking her class for many years.

“After a few years I encourage students to enter into local competitions,” she said. “Many of them have and many of them have started winning awards for their artwork. It’s very exciting.”

“I stand up the whole time when I’m working so it is not a relaxing activity,” she said. “And I have to have my brain fully engaged in what I’m doing. There is a lot of decision-making, a lot of processing of visual information while I’m working. It’s not an easy task. It feels like work but the satisfaction comes when things start coming together.”