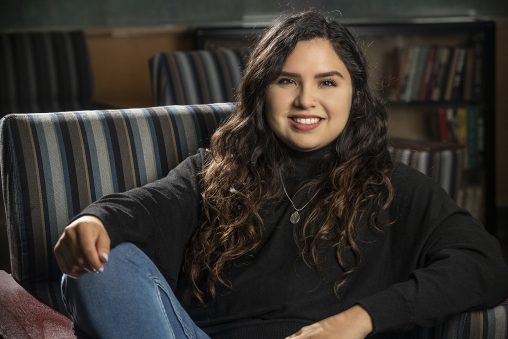 Jazmin Perez, who earned a bachelor’s degree in political science from Wright State and is now pursuing a master’s degree in international and comparative politics, grew up working in her parents’ restaurant. (Photos by Chris Snyder)

Food is a huge part of family history for Jazmin Perez, a Wright State University graduate student whose parents have worked in the restaurant business for nearly three decades.

That’s why it was natural for Perez to talk about the importance of food when she was selected to be a speaker at the TEDxDayton Salon Food Talk.

Perez’ parents immigrated to the United States from Mexico 27 years ago. She was born in Corbin, Kentucky, the second of 10 children.

After operating several restaurants, the family moved to Dayton in 2005 and currently run a family eatery in Kettering called Los Reyes Mexican Restaurant. Jazmin began working there hostessing and waitressing when she was 11.

“That is how I paid for my college, working at the restaurant; I paid my tuition with cash tips,” she said. “Working there taught me a lot about work ethic. It taught me a lot of people skills.”

Perez said restaurant life is exhausting, especially when it is your own family business.

“But I wouldn’t go back and change anything except maybe take a breather now and then,” she said.

Perez learned to read at a young age and always loved reading and history. An eighth-grade teacher cemented her love of history, and a class during her junior year at Beavercreek High School focused on the political aspects and driving forces of history.

“The class really taught us how to think about how leaders’ decisions affected historical outcomes,” she said. 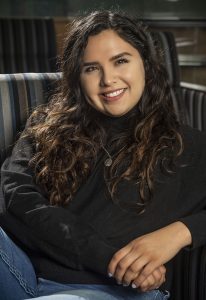 Jazmin Perez decided to return to Wright State for a master’s degree because of the university’s faculty members.

After graduating in 2013, Perez enrolled at Wright State and earned her bachelor’s degree in political science, with minors in economics and Spanish.

In 2017, she began law school, but she really wanted to go into higher education to teach and conduct research.

“I realized I could accomplish the goals I want to accomplish without a law degree,” she said.

So it was back to Wright State, where she is now pursuing her master’s degree in international and comparative politics.

“My professors at Wright State over the years have been fantastic,” she said. “That’s kind of what brought me back for my master’s.”

Laura Luehrmann, professor and director of the master’s program in international and comparative politics, said Perez is absolutely genuine. “There is no gap between what she says she stands for and the actions that she takes,” Luehrmann said.

“Our faculty were so pleased when she decided to return for graduate study,” Luehrmann said. “She brings the intellect, experiences and passion necessary to succeed at that level, and it is clear she is already making a positive impact in the community.”

Perez works as a match support specialist for Big Brothers/Big Sisters, a nonprofit whose goal is to help children reach their potential through professionally supported, one-to-one relationships with volunteer mentors. She ensures that matches are going well and works with parents and schools.

But on Aug. 22, Perez was laser-focused on her TEDxDayton Salon Food Talk. It took place at the PNC Arts Annex in downtown Dayton in front of about 250 people.

Before the talk, Perez took part in mini-workshops and four different rehearsals. She was required to memorize her 11-minute presentation.

The first of seven speakers, Perez admitted to being very nervous.

Her presentation was titled “A Love Note You Can Eat.”

She first spoke about her parents’ immigrant experience and her upbringing, working in the restaurant. Then she dived into her food-is-about-people-memories-and-connections message.