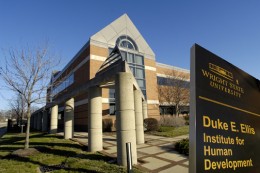 One of the largest universities in Dayton is planning a comprehensive series of upgrades to one of its most-used buildings.

Wright State University plans to update the Ellis Human Development Institute — a counseling and mental health services facility at the eastern edge of the Wolf Creek neighborhood — to better serve its clients and trainees. The institute provides low-cost behavioral health services to the west Dayton corridor and helps individuals throughout Southwest Ohio.

The proposed $1.4 million project involves renovating the restrooms, reception desk, front door, signage and parking lot to ensure better accessibility and ADA (Americans with Disabilities Act) compliance. Other aspects of the project involve deferred maintenance, such as upgrading or replacing the HVAC system, repairing the roof and masonry and resealing the windows, according to project documents.

“The need to ensure that our building continues to be accessible is particularly crucial at this time in our history,” said Dr. La Pearl Logan Winfrey, outgoing dean of the School of Professional Psychology (SOPP) at WSU. “According to national figures, 20% of adults and 17% of youth will experience some form of mental illness (this year) … and rates are rising across the board, particularly for groups like veterans.”

To ensure the proposal moves forward, Wright State requested $440,000 in financial support this year through the Dayton Regional Priority Development and Advocacy Committee (PDAC) — an arm of the Dayton Development Coalition (DDC) that establishes regional priorities for funding public projects.

If awarded, those funds will go toward construction and capital expenses.

The project could be crucial to those who rely on the institute’s services in west Dayton — a region that has long been subject to health disparities.

“In recent years, we’ve lost access to mental health services in that area — both with the closing of Day-Mont and obviously with the closing of Good Samaritan Hospital,” Winfrey said. “Thus, accessibility for agencies like the Ellis Institute are even more important to the continued provision of quality behavioral health care and preparation of an innovative health service psychology workforce.”

The proposal is one of several projects WSU has submitted for funding consideration through PDAC this year. In December, DBJ reported the university’s plans to build a $7.6 million workforce center at one of its satellite campuses. Click here for more about that project.

Gifted to the university from the state of Illinois in 1989, the Ellis Human Development Institute is administered by doctoral candidates from Wright State. The institute does not turn away clients based on their ability to pay, and it offers a full range of services by appointment, including mental health assessments, therapy, consultations and program evaluations.

From an educational standpoint, the facility is particularly important to Wright State. Graduate students are required to spend at least one of their three practicum years in an “internal placement” role, meaning they work either at the institute or at Counseling and Wellness Services on WSU’s Fairborn campus, Winfrey said.

“That building is a very important part of our training,” she said.

The institute also offered walk-in services in 2019 for Dayton residents who were particularly impacted by the tornadoes during Memorial Day or the Aug. 4 mass shooting in the Oregon District.

In the future, SOPP officials are considering the Ellis Institute as a potential site for inter-professional training. The building would serve as a multidisciplinary site for several units within the college, which would enable students to share and collaborate on behavioral health and substance abuse issues, Winfrey said.

The PDAC committee will submit its chosen projects to government officials, who will then decide which projects receive funding. This process is typically completed in April.